The Medion Akoya E7220 (MD 98740) is a budget notebook with a 17.3in screen size. It’s almost identical in specifications to the 15.6in Akoya E6224 (MD 98630), but is obviously larger and has a price tag that’s $100 less demanding. We like its performance for the low price tag, and its battery life is better than we expected. Anyone buying the Akoya E7220 with realistic expectations should be pleased with what they get for the money.

See what you get in the box with our Medion Akoya E7220 slideshow.

Medion’s newest laptop has a plastic body that’s finished in a two-tone glossy faux-brushed metal paintjob. It’s a far cry from the near-impervious solidity of the Apple MacBook Pro, but the Akoya E7220 seems reasonably scratch-resistant. The body flexes if twisted, but this will happen to most laptops that are cheaply constructed. The Medion Akoya E7220 (MD 98740) notebook weighs 2.56kg — it’s no aluminium-and-carbon-bodied ultraportable, but it’s not too heavy given its 17.3in screen size.

The keyboard of the Medion Akoya E7220 is a standard-size one, although the keys seem ever so slightly smaller than the ones on the MacBook Pro we used as a benchmark. The feel of the keyboard is OK, but there’s not much key travel so it’s easy to miss a stroke or two when you’re typing fast. The inclusion of a full-size keypad might interest business users but we wish there was a bit more room between it and the Enter/Shift/Backspace keys on the keyboard’s right.

Similarly, the multi-touch trackpad of the MD 98740 is a bit smaller than we were hoping — the width is fine but we would have liked it to be a little longer to accommodate larger fingers and to make scrolling easier. Basic two-finger gestures for scrolling, zooming and other functions are supported. The trackpad is finished in the same gloss coat as the rest of the laptop body but this doesn’t impede smooth scrolling or pointer use. 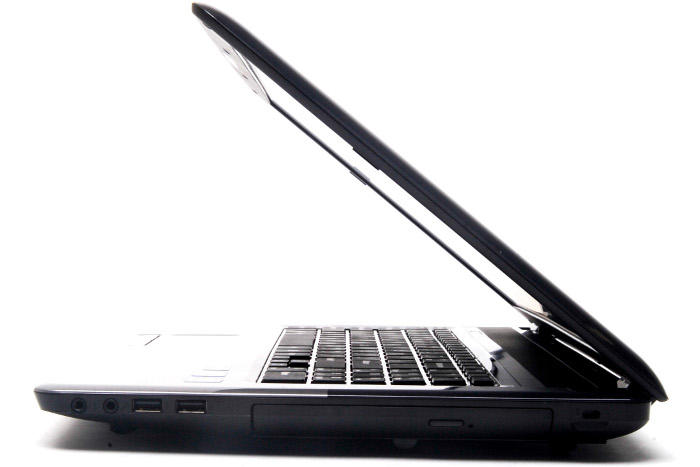 The Medion Akoya E7220 is not especially thin, but it is not as bulky as many other large-screen laptops.

The input/output ports arranged along the MD 98740’s sides are fairly standard fare. The left-hand side has power, Gigabit Ethernet, VGA, HDMI and two USB 3.0 ports, and the right has a Kensington lock port accompanied by the tray-loading DVD drive, an additional two USB 2.0 ports and headphone/microphone jacks. A multipurpose memory card reader supporting a variety of formats including SD and Memory Stick is hidden at the front of the notebook.

The power button for the laptop is located above the left-hand side of the keyboard. There are a few touch-sensitive buttons above the keyboard to toggle Wi-Fi, mute and adjust the sound and control media playback.

Next page: Specifications and performance