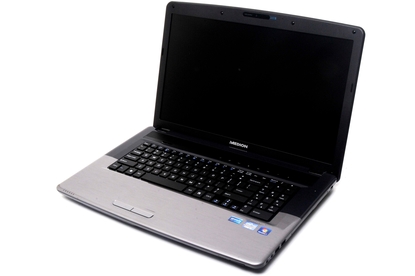 The Medion Akoya E7220 has specifications that are at the bottom of the pile when compared against most of the other notebooks that we test here at PC World, but for basic productivity and Web use we think it’s more than adequate. It’s not appropriate if you intend to play any 3D games or use any demanding programs, but for a family’s basic email, Facebook and Web use it will do a perfectly acceptable job. On a price comparison the Medion comes up against the MSI A6200 and soundly beats it, while the near-equal Dell Inspiron 15R is at last $100 more. Included in the Medion's price is a copy of Windows 7 Home Premium Edition, as well as a small range of other software.

The processor used in the Akoya E7220 is a second generation Intel Core i3-2310M. It’s at the bottom of the pecking order for Intel’s current CPUs but still manages to wring out reasonable performance figures. We recorded a time of 1min 21sec for our iTunes test, and the best result for Blender was 57sec. The notebook’s integrated Intel HD graphics helped it to a middling score of 4216 in the 3DMark 06 graphics test — an OK score but representative of the mediocre performance the Akoya E7220 would give in a modern 3D game. You can see how these figures compare to other notebooks we’ve tested this year by looking at our 2011 notebook performance chart.

The 750GB internal hard drive of the MD 98740 is a Hitachi Travelstar 5K750, running at 5400 RPM. It’s a basic model with only standard performance figures — we recorded write speeds of 41.5 MB/sec in our file transfer test, with CrystalDiskMark returning optimistic read/write speeds of 82.9 and 84.7 MB/sec respectively. There’s plenty of acceptably fast internal storage in the MD 98740 and it’s unlikely many users would need more. 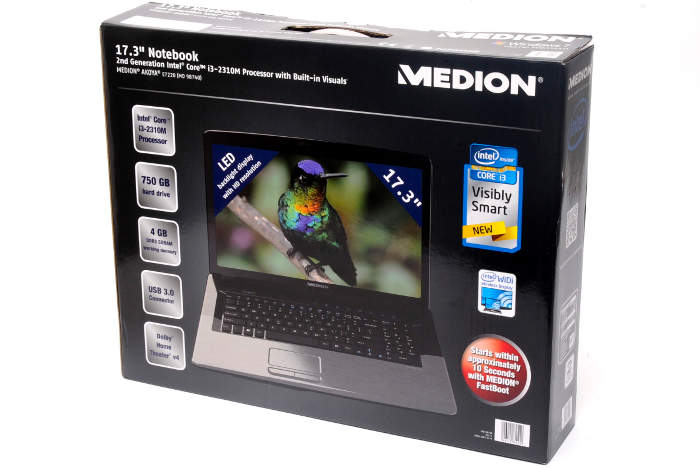 This is the box to look out for if you want to buy the Akoya E7220 in Aldi.

The hard drive of the Akoya E7220 (MD 98740) is audible during operation if you’re in a quiet room. We tested it in the empty PC World offices and found that when loading an application or transferring data it’s possible to hear the clicking of the hard drive’s head moving back and forth. It’s hardly a big deal, but speaks to the basic construction and thin plastic body of the MD 98740.

You can also install a second hard drive in the MD 98740 with nothing more than a jeweller’s screwdriver — there’s an additional hard drive bay hidden behind the notebook’s rear cover and Medion includes an appropriate 2.5in hard drive tray in the bundled accessories, so all you have to do is supply the hard drive.