The Medion akoya P4010 (MD 8850) all-in-one touch-screen PC is relatively inexpensive, has good features, and is easy to use and set up. That's enough for us to recommend it to anyone who is after a PC that the whole family can enjoy.

Medion's akoya P4010 (MD 8850) all-in-one touch-screen PC is a Christmas present the whole family will enjoy. This PC, which can be picked up at ALDI supermarkets, has a Full HD, 21.5in screen, plenty of RAM, a decent CPU and all the features you need to use it as a competent media centre.

The Medion akoya P4010 (MD 8850) is an all-in-one Windows 7–based PC that sits on a desk just like a photo frame. You can lean it back or stand it up straight, and it has good viewing angles so you can see the screen clearly when sitting off centre. There aren't many controls to play with on the unit itself (just the touch buttons that can change the brightness and volume level) so it's very simple to operate. Audio jacks, three USB 2.0 ports and a memory card reader are located along the left side; at the back there are four more USB 2.0 ports, as well as an Ethernet port, an antenna jack, PS/2 ports, a line-in jack and a digital audio jack. The right side has a DVD burner. At the bottom of the PC there are stereo speakers and there is a webcam just above the screen.

The touch screen allows you to navigate Windows 7, launch programs, select music and video files, and browse the Web simply by tapping the screen or dragging your finger. It's not as fancy as multi-touch screens, which allow you to use two fingers to zoom and spin photos, for example. It's still a useful way to navigate without using a mouse and keyboard. It even makes it easy to use this PC as a kiosk-style computer for viewing photos, playing videos and listening to music. To facilitate this, CyberLink PowerCinema is included. The program finds all the media files on your hard drive, then you can use your finger to touch the large icons that allow you to view or listen to those files. 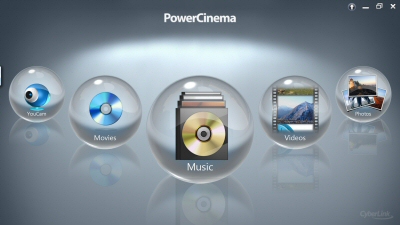 CyberLink PowerCinema can be used to turn your Medion touch-screen PC into a media kiosk. 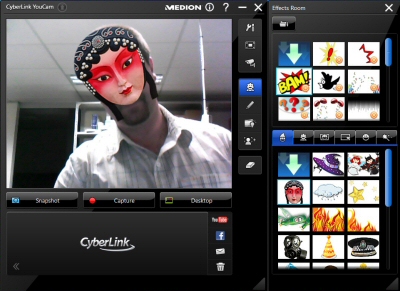 You can also launch the webcam application from within PowerCinema, and the program can apply a range of entertaining effects .

We found the touch screen to be responsive during our tests, although we did have to calibrate it so that the pointer would be located directly under our fingers. It's a resistive touch screen, which means that you can either use your finger or an object such as a round-ended pen to move the mouse pointer. It can't be used effectively for writing and drawing; if you rest any part of your hand on the screen while you write, the pointer will move. Gestures such as flicks can be used to navigate Web pages and to select different items in PowerCinema, but the gestures weren't always recognised when using Internet Explorer. You're better of just tapping the buttons in your browser.

On the inside, the Medion all-in-one PC is powered by an Intel Pentium T4400 CPU, which runs at 2.2GHz and has two cores. It gives the PC plenty of power for running everyday office applications and Web surfing. It's also suitable for encoding media files, as well as image and video editing. The PC has 4GB of DDR2 SDRAM (3.25GB is usable for the system), a 7200rpm, 1TB hard drive and a 256MB GeForce 9100MG graphics adapter. These components mean the Medion akoya P4010 will be swift during all kinds of home computing tasks, except for gaming.

In our WorldBench 6 benchmark suite, it recorded 87. To put this in perspective, it's a little faster than a typical $1000 15in notebook computer such as Dell's Inspiron 1545, which uses a mobile version of the Intel Core 2 Duo CPU. In our iTunes MP3 encoding and Blender 3D rendering tests, the Medion recorded times of 1min 21sec and 1min 23sec, respectively. Again, these times are similar to what the Dell notebook achieved and indicate that the computer can be used to quickly rip your CDs and even encode videos for your portable media player (such as the Creative Zen or iPod Touch).

The graphics card is not a powerful model, and it doesn't have dedicated memory, so it will share up to 256MB of the PC's 4GB of RAM. Nevertheless, it recorded 1316 in 3DMark06, which is a decent score for a low-end graphics card.

The hard drive's transfer speed of 37.85 megabytes per second is fast, and the large capacity of the drive means you'll be able to install plenty of programs and store many hours of recorded digital TV programs. We also like the fact that the hard drive is a 3.5in Serial ATA–based drive in an easy-to-access compartment (you have to remove one screw), so you can easily swap it out if you need to.

We love the fact that the Medion akoya P4010 has a built-in digital TV tuner and it comes with a remote control and receiver. It all works seamlessly when you pull it out of the box, plug it in and power it up — indeed, all you have to do to set up the Medion for the first time is plug in the power brick, your TV antenna cable and the remote control's receiver (the keyboard and mouse are cordless).

You can sit comfortably in your armchair as you set up the TV tuner and begin to channel surf and record programs. The built-in speakers are adequate for a small room, unless you want booming bass and very loud volume. There is a digital output for plugging into an external amplifier and making the Medion part of your home theatre setup.

We're not fans of the cordless mouse and keyboard that ship with the Medion, as the mouse is too flat and not always 100 per cent responsive, and the keyboard is a little small and uncomfortable to use. They can be replaced by peripherals of your own choice down the track.

The screen has a native resolution of 1920x1080, so it will display HD channels perfectly, and it's not a glossy screen so it's not very reflective. Its colours and contrast are good enough for viewing photos and videos, but you will want to keep it clean — fingerprints can become a nuisance.

Because the PC comes with 802.11n wireless networking in addition to Gigabit Ethernet, you can quickly join your existing wireless network to start using the Internet straight away. The integrated webcam means you can also start using Skype immediately if you have an account. You will have to plug in a good microphone, as the built-in one is not fantastic.

So there you go. Not only can you use this all-in-one PC for everyday computing tasks, it's also a very good media centre. Use it to watch and record digital TV, play DVDs, listen to music and view photos; it has plenty of USB 2.0 ports (seven), so you can even plug in an external Blu-ray drive down the line (such as the ASUS SBC-04DIS-U).

At $1299, the Medion akoya P4010 (MD 8850) represents great value. A similar type of machine from HP will cost you at least $1699 and will have fewer features and less storage capacity. So if you're in the market for an all-in-one touch-screen PC and happen to come across this one at ALDI, be sure to grab it.