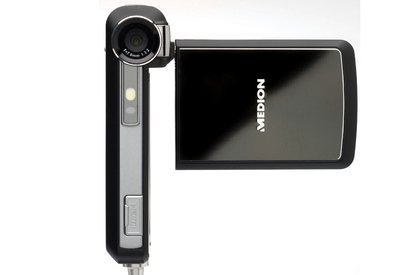 If you want a 'proper' camcorder with all the HD connections included and the bonus of a fairly good resolution camera built in, you’d do well to give the Medion Life E47000 a look. An accomplished model with an unbeatable price tag — just watch out for battery drain.

As well as capturing video footage at a very respectable 1280x720 — the same HD resolution as the Flip Video MinoHD and the Kodak Zx1 — the Medion Life E47000 offers 5Mp still photo capture and comes with an HDMI digital connection.

A standard TV-out port and female mini USB port are also included with the Medion Life E47000. Medion even includes the HDMI cable needed to connect to an HD or HD-ready TV.

You don't get an SD card for your recordings, but given that the Medion Life E47000 offers features such as motion-detection and image stabilisation, we really aren't complaining at Medion about this one omission. The SD card slot is cunningly hidden at the base by the battery cover.

The Medion Life E47000 is a 'proper' camcorder in the traditional flip-out screen sense. Said screen is a full 3in across and turns through 180 degrees — useful if you want to use it as a webcam as Medion suggests in its '5 in 1' marketing.

Footage can be recorded in widescreen (16:9 aspect ratio) and as well as the built-in speaker/microphone, there's a microphone port should you want to record a soundtrack or narrate a voiceover. There's a 10-second delay camera timer too.

You even get a choice of audio output formats: AVI, WAV or MP3. Photos are uniformly captured as Jpeg images and, as with the excellent Sanyo hybrid camera/camcorders, are triggered by a dedicated hardware button near the top of the Medion's 'spine'.

White balance and exposure are automatic on this fixed f7-stop camera, with settings for daylight, fluorescent and Tungsten artificial light. There's a flash if needed. Luckily, we were able to test it out in strong sunlight.

We didn't get the greatest results from the stills camera, with somewhat fuzzy, purple-fringed close ups of a pretty flower bed, though the lighting wasn't particularly favourable. Happily, the Medion fared very well when we took a photo of a monkey puzzle tree against a glorious blue, cloudless sky and with only a small amount of zoom applied.

A red-eye reduction mode and the option to adjust the exposure compensation were further welcome additions.

Just below the camcorder and camera shutter buttons is a telephoto to wide-angle rocker zoom that operates quietly and smoothly. Using these, plus the internal voice recorder, we took some very satisfactory video footage, with little vocal muffling even though we were shooting on the move.

Shooting into bright sunlight across a large open expanse, the footage on full zoom was still detailed enough to make out seated groups of picnickers and we were able to follow the action of a football team, again, by zooming in from a distance. When we changed to more favourable lighting conditions, colour saturation proved impressive and detail plentiful.