It's still relatively early days for MeeGo, but, judging from this release, we suspect this Linux distribution has a great future ahead of it

MeeGo is an Intel-sponsored Linux distribution designed for netbooks and other mobile devices (such as Nokia's extra-geeky N900 smartphone). We tested MeeGo on a Lenovo IdeaPad S10 netbook and were extremely impressed; we think it's seriously worth giving it a try on your mini-notebook, and maybe ditching Windows or a "normal" Linux distribution.

Most Linux distributions these days offer standard Gnome or KDE desktop environments (though some, such as Mythbuntu, employ the lightweight Xfce system, and of course there are numerous distributions that use a completely different graphical user interface, or are command line–based). MeeGo, however, has taken a completely different tack, and done so with considerable success.

MeeGo is a product of Intel's Moblin project and Nokia's Maemo operating system, and it has inherited the former's interface — at least in its netbook incarnation. An interface is also available for smartphone-type devices. 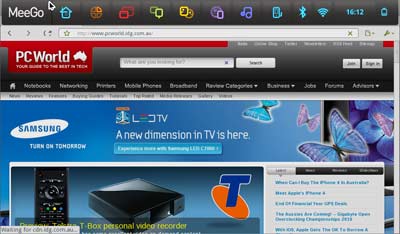 MeeGo has a tabbed interface, and Google Chrome is the default Web browser.

The main MeeGo interface lacks a classic desktop. Instead, there is a row of 10 icons across the top of the screen that works like a series of tabbed windows in a Web browser. The Applications tab lets you run whatever programs you like; open applications then show up in the Zones tab, letting you easily switch between them. The applications installed by default include most of the fare you'd expect from a Linux distribution, though Chrome is the default Web browser and no office suite is installed. An Internet tab lets you manage browser windows easily, as well as quickly look through bookmarks. The Media tab lets you access music and videos. The Status tab allows you to monitor Web services (only Twitter and Last.FM in the default install), while the People tab is home to instant messenger conversations. The Devices tab provides access to hardware information and settings, as well as the key folders like Documents and Downloads. 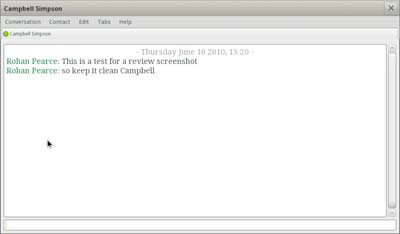 The MyZone home tab offers quick links to applications, updates from Web services (such as Twitter), links to recently used files, and access to a calendar and task lists.

We were in love with the interface from the very beginning: for a netbook with minimal screen real estate (1024x600) and limited RAM (1GB) and processing power (Intel Atom N450), it makes so much sense to ditch the classic desktop metaphor. We would much rather deal with the large, colourful icons of MeeGo than the Windows 7 interface for most tasks. The interface was generally snappy, although we would periodically be left waiting when switching to a new tab, for example. It never got to be too frustrating, however, though you should exercise the same restraint in terms of multitasking, media encoding and other taxing tasks that you would in any other operating system running on a netbook. 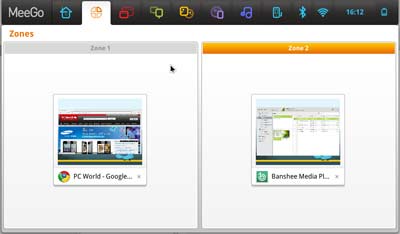 Package management is RPM-based. In general, we're fonder of the APT system used by Debian and its derivatives (such as Ubuntu) but unless you intend to mess around at the command line, the GUI-based package management tool will make it transparent. (Our reservations about RPM probably relate to the earlier, pre-YUM days of dependency hell. Oh the pain.)

If you're interested in getting geeky, there is a single virtual terminal running (accessed via Ctrl + Alt + F1), or you can just run a terminal in the GUI. Running uname -r from the command line gives the kernel version as 2.6.33.3-11.1-netbook.

Basic installation of MeeGo is extremely simple and quick — except, as is sometimes the case with Linux, for getting all your devices working. Using a Sony Microvault USB drive, we were able to install the OS in under five minutes using the default partitioning scheme. Basic post-install setup (creating a user account, selecting a time zone etc.) took about a minute. 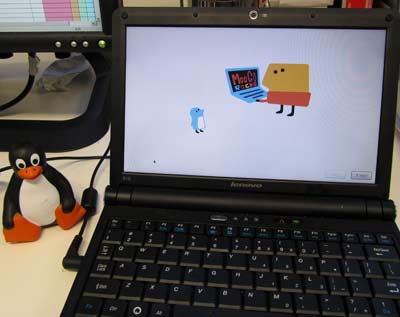 Our only problem came afterwards, when we needed to get Wi-Fi working (wired networking was fine). We got the Lenovo S10's Broadcom Wi-Fi adapter working thanks to instructions from MeeGo 1.0 Wi-Fi; the instructions are easy to follow, but obviously it's still a hassle to set up.

Overall we were very impressed with MeeGo 1.0. There are a few interface niggles — some applications didn't fit correctly on screen, and after closing a program or a dialogue we'd end up on a tab we didn't expect to be on — but we didn't encounter any showstoppers. Each time we rebooted we had to switch Wi-Fi off and on again in the Networks tab, despite the details of our network being remembered. MP3 support is another annoyance: like most Linux distributions, MP3 decoding is not supported "out of the box", and it's more difficult than normal to install (see this thread on the MeeGo discussion forums). 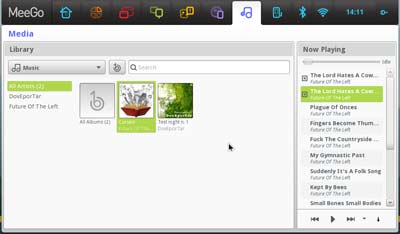 Getting MP3s playing in MeeGo is currently a little difficult.

According to Ars Technica, Novell, Mandriva and others are planning to create their own MeeGo-based operating systems. We think that this development has great potential and are looking to see what vendors can do with MeeGo.

In conclusion, if you have a netbook that's supported by MeeGo, whether you're currently running Linux or Windows, give some serious thought to running this operating system. We tried it, and we love it.