Like the Apple Magic Mouse, Microsoft has added touch sensitivity to this mouse, along with haptic vibration feedback and a curiously arched construction 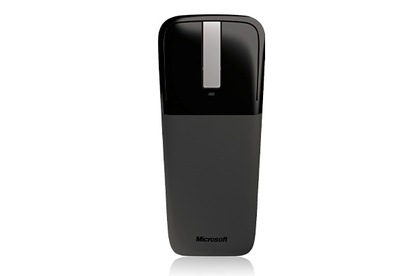 Portable, practical, good at its job and more desirable than a PC peripheral has any right to be, Microsoft's Arc Touch is a superb wireless mouse. Yes, it's expensive - not to mention a little unconventional for some tastes. But we reckon well-heeled businessmen and laptop-toting road warriors could do a lot worse.

Microsoft’s Arc wireless mouse was a big hit in 2008, and a groundbreaking piece of design. It was elegantly curved with an incongruous hinge in the middle, but this allowed it to be both portable and comfortable to use. Less pioneering but as charming as ever, the new Microsoft Arc Touch updates the Arc's flexible design in several ways.

In contrast with the original Arc, which folded for portability, the Microsoft Arc Touch bends gently over to form the distinctive Arc curved shape. The bending mechanism also serves as the on/off switch: when flat (designed to fit neatly in a laptop bag or pocket) the mouse is off, and when bent it's on.

The bending mechanism is constructed from polyacetate and steel, and Microsoft says it will last for 40,000 bends without deteriorating. We’ve not done that many, but it seems pretty solid to us.

You can 'flick' for inertial, freewheeling scrolling with momentum, or press and hold for slower, more accurate scrolling.

A nice touch – no pun intended – is the slight feedback you get when flicking. It makes a very soft rattling noise, and even produces a tiny haptic shiver. It’s a surprisingly satisfying effect.

A more obvious benefit – and the reason Microsoft replaced the scrollwheel with a flat touch strip – is that it reduces the depth of the product. When flattened, the Microsoft Arc Touch is only around 14mm thick at its widest point, and 7mm thick for most of its length, making it ideal for ‘pack and go’ customers.

Wireless range is up to 10m, and worked flawlessly in tests. A 2.4GHz nano USB wireless receiver snaps magnetically into the back of the Arc Touch, for added convenience on the go.

If we have any issue with the design of the Microsoft Arc Touch mouse, it’s that it’s almost too touchy-feely. The left- and right-click buttons are a shade too soft, and might benefit from a snappier action – double-clicking can actually be a bit tiring. And those who are used to more conventional mice may find the Arc Touch’s shape a bit, well, odd. But we’re struggling to come up with much to complain about.