The original Fable promised gamers the world but upon its release many players lamented the unexplained absence of many promised features. 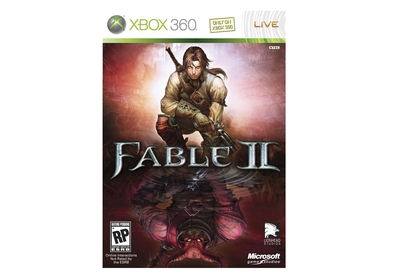 Lots of games claim you can go anywhere and do anything inside their worlds. The trouble is, once you've eluded the cops for the umpteenth time, the whole exercise starts to feel hollow when your actions leave no lasting impact. What makes Fable II so thoroughly absorbing, despite a few notable shortcomings, is the heady illusion that every choice you make sends ripples through the world, its people, and your own simulated heart.

The original Fable promised gamers the world but upon its release many players lamented the unexplained absence of many promised features. Even though it ultimately turned out to be an exceptionally enjoyable game, and acclaimed designer Peter Molyneux apologised to his fans, the whole affair left a bitter taste in many mouths.

It's now four years later and it seems as if everyone involved has learned their lesson. As a result, the superior sequel, Fable II, is landing on store shelves with far more realistic expectations. What's most surprising isn't that the game exceeds those tempered expectations in almost every way that matters, but how well the many disparate activities come together to create a beautifully coherent whole.

Yes, you've been burned before when you bought into the fantastical promises that Peter Molyneux made but he's learned his lesson and so have you: the hype has been kept to a minimum and our expectations have been kept in check, which is a good thing for everyone involved. The developers can release a game to realistic expectations and gamers aren't left disappointed because they didn't get 'teh best game evar!!!!1111!!1!' But guess what: Fable II is pretty damn good, so you can safely let your expectations climb high, because chances are this full featured and wonderfully complex game will meet them.

With the discovery of gunpowder, the realm has forgotten all about magic, and seems on the cusp of a new age that you're destined to help define. Our story begins on the mean streets of a Bowerstone slum, where a mysterious blind sage is encouraging two streetwise orphans to acquire a supposedly magical music box. From the moment a passing sparrow drops a nasty present on my young protagonist's head, I'm presented with quests that end with decisions instead of predetermined outcomes. Do I kill the beetles that infest a merchant's warehouse, or destroy the inventory for a local troublemaker instead? Once I've gathered a guard's lost warrants, do I return them in the interest of law and order, or sell them to a local thug? A fleeting choice determines whether this district becomes a thriving and law-abiding neighbourhood or an anarchic slum filled with wreckage and makeshift shacks. It's enough to make any city planner seethe with jealousy.

The main quest excursions that followed were a different matter, and led me to experience some disappointment in the early hours of play. As I journeyed through the towns, forests, and caves of Albion digging up information on an evildoer named Lucien, the decision-making punch of the introductory sequence and its profoundly tangible consequences went missing. My behaviour only affected how my motivations were presented, never the path I walked. Worse, I'd sometimes find an interesting hole to explore, only to be told that entering it would cause my game to "revert to a previous state and location." Huh? However, the moment I took a break to explore the multitude of quirky side quests and optional activities, the sense that my actions had a tangible impact on everything around me returned, and my experience changed drastically for the better.

Whether you're male or female, good or bad, there's an astonishing amount to do, and your deeds directly affect the list of available opportunities. As a good guy, I rescue slaves, hand out autograph cards, and pound an anvil for gold. As a villain, I assassinate strangers, slap anybody who looks at me sideways, and rob everyone blind. I gamble at surprisingly involved games of chance, sire and serenade offspring, garner titles from "Chicken Chaser" to "Chosen One," terrorise rich and poor alike, and make amends with community service. From moment to moment I could be a bounty hunter, a bartender, a real estate magnate, and more.

The diversions aren't simply idle timewasters, either. Act like a pillar of the community, and entire towns fall in love with you, merchants grant discounts, and you develop a bit of a halo. Make like the town psychopath, and crowds run scared, property values drop, and you take on a more sinister appearance. Even your expressions change: the twisted learn to extort, while the righteous learn to apologise. Every interaction and animation is informed by a distinctly British sense of humour, but the tone of the world changes to reflect your defining characteristics. As a result, the longer I spent in Albion, the more it felt like a real place. While the ridiculously overhyped dog does little beyond perform simple tricks, growl at and attack nearby monsters, and alert you to treasure locations, the deep, living world delivers a robust sense of connection. My only quibble is with a surprisingly minimal mapping system that offers little help with finding particular shops.