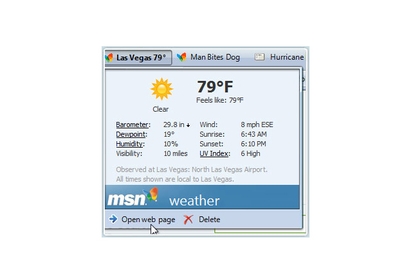 Those who expect Internet Explorer 8.0 to be a warmed-over version of IE7, or a me-too response to Firefox 3.0, will be surprised by the just-released Beta 2 of IE8.

Internet Explorer 8.0 Beta 2 offers a well-thought-out set of features that makes web browsing faster and more intuitive, including more intelligent tabs, a much improved Address Bar, and new tools designed to deliver information from other web pages and services.

The previous beta of Internet Explorer was labelled a developer's preview. It lacked many of the new features — notably, those aimed at improved navigation and better use of tabs — revealed in Internet Explorer 8.0 Beta 2: the first beta of IE intended for general consumers and enterprise users.

People who frequently use multiple tabs will welcome the introduction of what Microsoft calls Groups. When you open a new tab from an old one, the new tab is placed directly to the right of the originating tab, rather than to the right of the right-most-opened tab, as in IE7. In addition, the new tab is given the same colour as the originating tab. In this way, all of your related pages are automatically grouped next to one another and colour-coded. You can also easily move tabs between groups. Simply drag a tab to another group, and it takes that group's colour and becomes part of the group.

And wait, there's more: you can right-click on any tab to control its entire group, including closing the group, duplicating the group and removing the chosen tab from the group. From the same right-click menu, you can also reopen individual tabs that you've closed and perform actions on individual tabs. One useful feature is missing: the ability to reopen an entire tab group. Instead, you have to reopen each tab individually. Microsoft says that it is considering adding this feature to the final version of IE8.

Another subtle improvement in Internet Explorer 8.0 Beta 2 is aimed at better navigation and browsing. When you open a new tab, instead of getting a blank screen as you did in IE7, the page opens with a variety of links, allowing you to reopen tabs you've previously closed, reopen all the tabs from your last browsing session and use several new IE8 features, including InPrivate Browsing and Accelerators. (We'll get to those features later in this review.)

The Address Bar in Internet Explorer 8.0 Beta 2 has received a significant makeover, and it's been much improved. Like the Awesome Bar (officially the Smart Location Bar) in Firefox, the IE8 Address Bar now adds functionality well beyond merely providing a place to type a URL. Both of them don't just list recently visited sites as you type, but also grab URLs from your bookmarks. Both also look at page titles for matching text.

However, Internet Explorer 8.0 Beta 2's Address Bar has features that Firefox's does not. It sorts its results by category (such as History, Favorites and Feeds) and searches through RSS feeds. You can also edit the list - for example, by deleting entries from it, so that the next time you type in that text, those entries won't appear. On the other hand, the Awesome Bar includes icons at the far right that let you quickly add a page to your Favorites or to subscribe to any RSS feeds on a page you're visiting; Internet Explorer 8.0 Beta 2 doesn't have those features directly in the Address Bar.