The free Microsoft Photo Story lets you create multimedia "stories" from your photographs that you can play back and narrate. 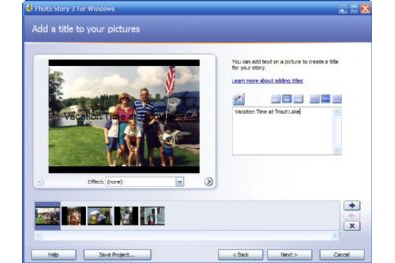 A fun, interactive tool to help you make the most of your digital photos, Microsoft Photo Story is well worth the free download.

The free Microsoft Photo Story lets you create multimedia "stories" from your photographs that you can play back and narrate.

In each Microsoft Photo Story, your photos display one after another, with transitions between them, and there are also effects for playing each photo, including panning. You can also record audio narrations that play as the photos are displayed. Think of the stories as photo slideshows, but with special effects and audio, and that simple to create and distribute.

Creating stories with Microsoft Photo Story is exceptionally easy. Select the photos you want in the story, add a beginning title, include any music you want, and tell the program to create the story.

With Microsoft Photo Story you can also customise the transitions and motions. There's a preview, so that you can edit the story until you get it the way that you want.

Although Microsoft Photo Story itself won't create self-running shows that can be distributed on CD or DVD, you can import the .wmv file that Photo Story 3 creates into a CD or DVD authoring program for the same effect.