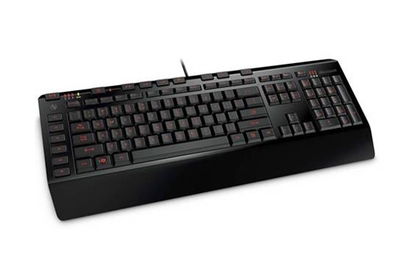 Our first impressions are that Microsoft's new SideWinder X4 gaming keyboard is a robust product with several interesting, useful gamer-oriented features. Watch this space for a more detailed review and scores.

We'll post a more detailed review once we've given the hardware a longer examination, but first impressions from half an hour of gaming, typing and general messing about with Microsoft's SideWinder X4 gaming keyboard are favourable.

Continuing the touchy-feely, customer-focused theme of the Windows 7 marketing push, Microsoft says the design nuances of the SideWinder X4 are the result of listening to the customer - specifically the gamers who bought the X4's higher-end predecessor, the Microsoft SideWinder X6.

The biggest concern, Microsoft says, was that multiple keystrokes were periodically failing to register, a particular issue for players of real-time strategy games with their notoriously numerous and complex hotkey shortcuts.

To combat this, the X4 features design enhancements to minimise 'ghosting' by incorporating resistive multitouch technology - the same technology used in the company's Surface computing venture - under the grid of keys. In theory, up to 26 keys can be pressed at once without causing problems.

There are six programmable keys, labelled S1-6, down the lefthand side of the keyboard; above these sits a 'bank' button, which toggles between three banks - standard, gaming 1 and gaming 2, for instance. Each bank has its own set of key programs, giving you in effect 18 programmable keys within easy reach.

The all-important typing action seems good once you get used to the relatively heavy feel to the keys - presumably in deference to the considerable demands of long gaming sessions. The keys are nicely spaced - this is a pretty hefty piece of kit, with a nicely robust feel. We did find the placement of the S keys somewhat distracting, frequently hitting these by accident when aiming for Shift, but again this is something you're likely to get used to after a while.