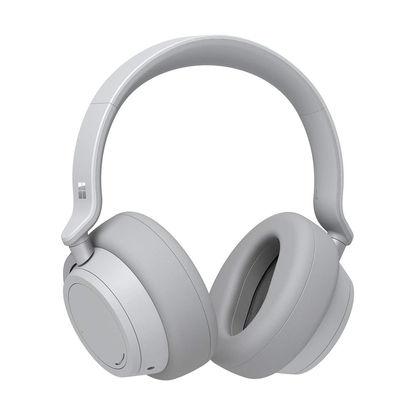 The design and audio quality is sound but they’re certainly not good enough to justify the premium price.

Should I buy the Microsoft Surface Headphones?

The Surface Headphones aren’t bad but they’re somewhat-hamstrung by Microsoft’s gutsy call to release them at such a high recommended retail price. It feels downright indulgent to consider these as a credible alternative to stuff like Boses’ pricey 700 Series noise-cancelling headphones or Sony’s equally-accomplished WH-1000M3s.

The Surface Headphones are a great first effort by Microsoft but you’re paying more for the Surface branding here than any sort of superior noise-cancelling technology.

In Australia, the Microsoft Surface Headphones are priced at $499.

In Australia, you can buy the Microsoft Surface headphones for an RRP of $499 through:

Opting for a pearl white color palette full of whites and greys, the Surface Headphones mash together metal, plastic and fabric in a way that’s not all that dissimilar from what brands like Sony, Jabra and Bose are doing nowadays. It’s in spite of those superficial similarities that the Surface Headphones remain distinct enough to stand out among the crowd.

Under the hood, the Surface Headphones come powered by a 40 mm Free Edge drivers. Out of the box, they also come with a fabric carry-case and a charging cable. In terms of buttons, Microsoft have stuffed everything onto the right earcup.

The underside here houses a power button, a mute button, a headphone jack for wired playback when you need it and a USB Type-C port used for charging.

When it comes to moment to moment control, the Surface Headphones rely on haptic sensors built directly into the earcups. Tap once to play. Tap again to pause. Double tap to skip. Triple tap to go back. If you’ve used any headphones with touch controls released from the last three or four years, you’ll feel right at home.

While it doesn’t quite go so far as to offer the PowerPoint integration found in Microsoft’s first set of true wireless earbuds, the Surface Headphones do have one unique hook in the form of fast and easy pairing with Windows 10 PCs via Swift Pair.

This works similarly to the fast pairing found with Apple’s AirPods and iOS devices but isn’t quite as frictionless. Overall, it’s nice to have but it’s not a game-changer.

The soothing melodies of Cage the Elephant’s “Come a Little Closer” were appropriately melancholy and and upbeat ska riffs of Reel Big Fish’s “I Know You Too Well To Like You Anymore” came across with just enough puffed-up pizazz to get me by but, compared to some of the other options, the Surface Headphones just didn’t deliver the same level of immersion or quality.

They’re a little soft on the bass, the fidelity isn’t there and the noise-cancelling rarely seemed to achieve the feat of fully isolating my against outside sound. Sitting in an office with the Surface Headphones on my head was certainly quieter than the alternative.

With noise-cancelling enabled and over Bluetooth, The Microsoft Surface headphones last for about 15 hours of playback. Turning off stuff like voice activation will net you three or so extra hours.

It feels like the Surface Headphones mostly exist simply to prove that Microsoft can make a decent pair of noise-cancelling headphones. The design and audio quality is sound but they’re certainly not good enough to justify the premium price. Still, they did leave me hungry for more.

If Microsoft can make a decent pair of headphones like this on a first effort, who’s to say how much better their sophomore effort will be.

Planning to pass on the Microsoft Surface headphones and need an alternative? Check out our guide to the best noise-cancelling headphones here.