Xbox 360 owners who are yet to own a compatible wireless adapter or are having troubles with their existing one will find the Wireless N networking adapter a useful purchase. The dongle provides wire-free gaming and media streaming on the Xbox 360, albeit at an expensive outlay.

If you own an Xbox 360 games console, you'll more than likely know that you own the only current generation console that doesn't have integrated Wi-Fi. Microsoft has offered an official wireless network adapter for some time and it's surprisingly capable, connecting to 802.11a/b/g Wi-Fi networks over both 5GHz and 2.4GHz radio spectrums. However, the original network adapter lacks WPA2 password encryption and won't benefit from the range and speeds offered by 802.11n Wi-Fi. The Xbox 360 Wireless N Networking Adapter addresses these shortcomings, but for owners of the original accessory there are few incentives to upgrade.

The 802.11n standard was finally ratified by the Wi-Fi Alliance this year. It hasn't changed much since its draft form, so most 802.11n routers and adapters are still compatible with each other. Routers that support the standard provide greater range and faster speeds than models with 802.11g Wi-Fi, and they can also work over both the 2.4GHz and 5GHz radio spectrums. This means you can get a stronger signal in congested environments, such as those with multiple routers or with interference from microwaves and cordless phones.

With the Wireless N Networking Adapter you can have your Xbox 360 at one end of the house and your router at the other but still receive a strong signal. The increased speed — a theoretical maximum of 300 megabits per second (Mbps) — is also handy when streaming high-definition media across the local network. However, your ability to play online multiplayer games and download games or movies depends on the speed of your Internet connection rather than the Wi-Fi adapter. 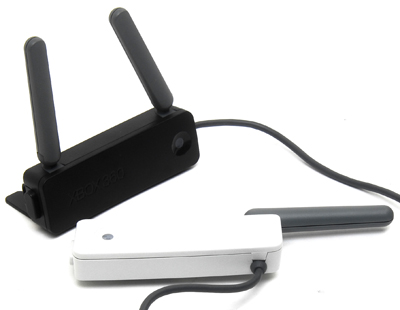 The Wireless N Networking Adapter and original accessory side by side

The Xbox 360 Wireless N Networking Adapter works much the same as the original wireless networking adapter did. Simply hook the adapter into the two divots on the back of the console, and plug in the USB cable. The 802.11n-compatible accessory uses two adjustable antennas instead of one. They should be angled to ensure the best possible signal; a V-shape is usually preferred. The USB cable protrudes out of the top of the adapter rather than the side, so it might be visible from your couch.

Once connected, configuration is simply a matter of heading to system settings on the console and finding your network. The Wireless N Networking Adapter will pick up 802.11a/b/g and n networks and provide a signal strength meter for each. You can input your network's password or use Windows Connect Now (WCN) setup if your router supports it. Using the standard controller to input a password can be time consuming. The Xbox 360 will remember your last used network and password between shutdowns and even when switching adaptors. It can't remember multiple networks, though, and this is a frustrating omission if you're regularly switching between two or more Wi-Fi networks.

Once configured, we easily connected to two 802.11n networks at a distance of 20m; one operated on the 2.4GHz radio frequency, while the other worked over 5GHz. Over both networks, streaming 720p media was flawless. However, we noticed little to no difference between the Wireless N Networking Adapter and the original accessory with Internet-based activity; both passed the Zune Video Marketplace's 1080p HD streaming test and downloaded a 66MB video in the same time.

If you don't yet own a Wi-Fi adapter for your Xbox 360, Microsoft's Wireless N networking adapter is an expensive but worthwhile purchase for wire-free gaming and media streaming. Those who own the original wireless adapter only need consider it if they are having problems with signal strength.