Use your iPhone to play with your Xbox's Dashboard 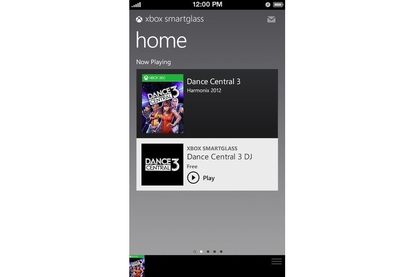 Xbox SmartGlass offers Xbox users a lot of convenience. While it cannot interact with games whatsoever, it makes using the Xbox dashboard and playing media a lot easier, especially if typing is required.

Microsoft’s Xbox SmartGlass app turns a smartphone into an Xbox 360 controller, giving you the ability to play with your console’s dashboard and input information by swiping and typing rather than tolerating the traditional thumbstick and button method. It is important to note, though, that it is not a controller replacement as it cannot interact with games, even when just inputting information.

The first time Xbox SmartGlass is opened, it will ask you to sign in so it can connect to your Xbox 360. This means that your console must be on and logged into your account. Once a connection is established, the Xbox 360 will confirm it with a pop-up on your television screen. The Xbox 360 and smartphone do not have to be on the same network, although both must be connected to the Internet in some way, be it Ethernet, Wi-Fi, or 3G/LTE.

When the login is complete, the Xbox SmartGlass home screen appears on the smartphone screen, which looks like a less comprehensive version of the Xbox dashboard. From there, you can search the Xbox catalogue, track and compare achievements, look over your saved games library, and edit your profile and avatar.

To take control of the Xbox itself, you tap through to the dashboard option on SmartGlass. A mobile ‘control pad’ will appear at this point. The skin is black, and navigation is done by swiping any part of the screen to whichever direction. A ‘B’ button is located in the top right corner, ‘X’ in the bottom left, and ‘Y’ in the bottom right. Tapping the screen once triggers as the ‘A’ button.

Using this pad, you can use the smartphone to navigate the Xbox 360 and all its features, use the keyboard to type to the console, browse the Internet, and play/control media, such as DVDs, videos, and music.

As mentioned previously, Xbox SmartGlass does not give you the ability to play games with the smartphone as a controller replacement. Once a game is launched, the smartphone cannot interact with the Xbox — you can't even type in a game. For example, when creating a character in FIFA 13, you still have to use the Xbox controller. Who knows what the future may hold, but at this stage, Xbox SmartGlass is designed to provide convenience when interacting with the Xbox dashboard.