An interesting alternative to the realism heavy action of Madden. 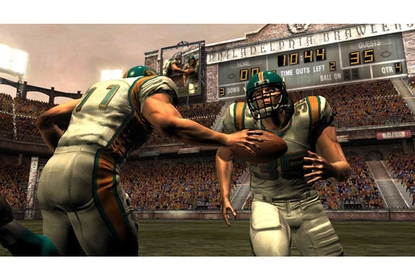 Over the top and crazy, Blitz II is an interesting take on the sport of football, but with some glaring missteps, it fumbles on its way to the end zone.

Blitz: The League II reminds me of this season's Chicago Bears: it has a couple of key pieces and a game-plan in place but there are some obvious holes that keep it from rising to the top of the ranks. However, it is an interesting alternative to the realism heavy action of Madden.

Blitz II focus on down and dirty football where you literally wrestle opposing players to the ground and stomp their skulls after the whistle's blown. You get a suite of power moves like stiff-arms, dive tackles and spin-o-rama's, and there's a meter that you can build up to pull off highlight reel worthy plays. You can wear down your opponents' stamina to affect their performance and players get injuries which are highlighted using wince-inducing animations.

The game also features a fairly compelling campaign mode that puts you into the cleats of a hot shot rookie. You "roll" his stats using a clever press conference gimmick where you answer questions about your abilities then take a team of scrubs through the ranks of the fictional League while battling opposing teams and a crooked commissioner.

But Blitz II's game-plan starts to fall apart thanks to a couple of nagging issues. The AI is rather uneven, meaning you either beat the crap out of brain-dead opponents or get your head kicked in by a team of supermen. There are also a couple of homerun plays that you can use to exploit defences for ridiculous amounts of yardage and the actual football aspect of the game is shallow.

I will admit, though, that Blitz II is entertaining in short bursts and that some of its features are interesting, even if the AI and shallow gameplay experience leaves something to be desired. However, it is a nice change of pace from Madden, so I recommend it to anyone who wants to toss the pigskin around without getting a lesson in football fundamentals.