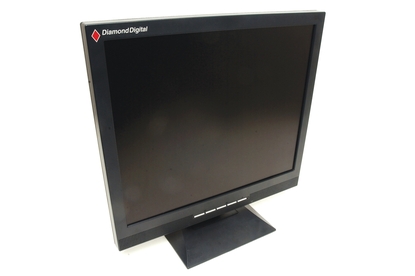 You should consider this model if you want a large screen for everyday tasks and occasional movie watching.

While it has a high brightness rating of 300cd/m², the DV191B was not among the brightest monitors during our testing. Its contrast ratio of 700:1, which is among the highest in the round-up, did produce excellent black colouring in our office environment.

In DisplayMate's extreme greyscale test, the screen did have a bit of a problem displaying light-grey levels on a white background. These colours were overly saturated by the white level and we found this to be the case during general use, too, and this may affect the way the monitor portrays light-colour detail in your images.

In the colour tests, we didn't notice any colour banding during the colour blending tests, and we could only notice very slight colour banding in the 256-level colour intensity ramps. Overall, this monitor gives off a very neutral colour display and is not overly rich.

Its 25ms pixel response time is the slow and this showed in our motion blur test where scrolling text was very blurry around the edges and very muddy overall as it moved across the screen. In saying that, the screen is more than capable of displaying video, but it probably will struggle with the more demanding and faster-paced motion of many current games.

Viewing this monitor from sides and from the top posed no problems at all.

As for build quality and aesthetics, the DV191B has a very stable base attached to its neck, which allows it to tilt backwards and forwards. The bezel around the edges and across the top is only 2cm thick. Its menu controls are laid out logically, but they are almost level with the surface of the bezel and can be hard to press.

While it should not be used for games, due to its low response time, this monitor is actually very comfortable on the eyes as it's not overly bright despite its 300cd/m2 rating. In saying that, we wish it was a brighter screen, because, lets face it, brightness can always be turned down if needed. It can display 16.7 million colours and was very good in all our colour intensity and colour blending tests although it struggled slightly when displaying light-grey colours on a light background.