Motorola deserves plenty of credit for producing an Android smartphone that's rugged but still has an attractive design. The Motorola Defy may not be the fastest Android smartphone on the market, but we recommend it for active users; it is also excellent value for money.

Motorola has released the world's first rugged Android smartphone, the Motorola Defy. The Motorola Defy is surprisingly stylish and light for a phone that is claimed to be dust, water and scratch resistant.

See how the Motorola Defy handles being submerged in water.

Check out our guide to other top Motorola phones.

Motorola has described the Defy as "Australia's first summer-proof smartphone". Surprisingly, given it is a ruggedised handset, the Motorola Defy is one of the lightest Android smartphones we've reviewed; it is a little wide, but it features an edge-to-edge display, a stylish rubber back and curved edges that make it comfortable to hold and use. Aside from the industrial-looking screws around the side of the casing, the Defy looks like a regular Android smartphone, so Motorola really does deserve a lot of credit for its design.

Motorola has emphasised that the Defy is not "waterproof" per se, but it is described as water resistant, and can handle being submerged in up to a metre of water. You'll need to make sure the plastic flaps covering both the headphone jack and the microUSB port are closed before you attempt to drown the phone; both are a little annoying to open, but effectively seal the ports from leaking water when correctly closed. 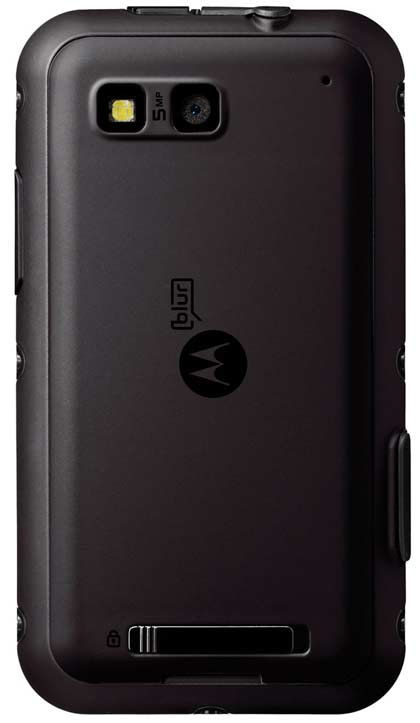 The Motorola has a stylish rubber back and curved edges, making it comfortable to hold and use.

We tested the Motorola Defy's water resistance in various situations, including holding it under a running tap and completely submerging it in a glass of water — and it did not skip a beat. We also dropped the Defy onto concrete surfaces, and the phone was undamaged apart from a few small scratches on the rear casing.

Motorola has used 'Gorilla Glass' for the Defy's display, which the company claims is difficult to scratch or crack. The screen is 3.7in when measured diagonally, but it is not as wide as the iPhone 4, which only measures 3.5in. Like the Motorola Milestone 2's screen, the display is bright and clear and has excellent resolution. However, text is smaller than on most other Android smartphones; some users may find it a little hard to read. We also aren't a fan of the touch-sensitive buttons that sit below the display. While the menu, home, back and search keys are backlit and generally responsive, they are easy to accidentally bump. They can't be used to wake the Defy when the screen is locked.