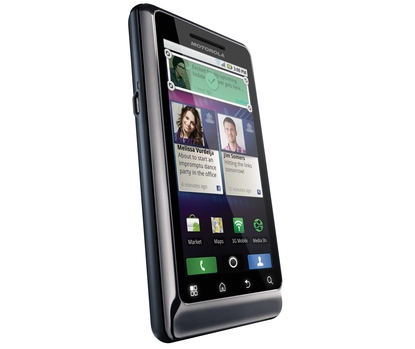 The Motorola Milestone 2 is a very similar smartphone to its predecessor. However, the Milestone 2's improved keyboard, HD video recording and faster processor are all welcome improvements and make it well worth considering if you're after an Android smartphone with a physical keyboard.

The Motorola Milestone 2 Android smartphone improves only slightly on its predecessor, the original Milestone. However, the new keyboard design makes text entry much more efficient, the faster processor improves performance, and HD video recording brings it in line with many of its competitors, making it well worth considering if you're searching for an Android phone with a physical QWERTY keyboard.

Check out our round-up of the top Motorola phones on the market.

The Milestone 2 feels very well constructed and capable of taking its fair share of bumps. The combination of hard and soft plastic also gives it a nice feel. Like its predecessor, the Milestone 2's slider mechanism isn't spring-operated but it feels much less awkward — it's smooth to open and close and is easy to slide open with one hand.

The full QWERTY keyboard of the Motorola Milestone 2 has undergone a slight redesign and the changes are all positive. The keys are now slightly raised and the five-way navigational pad has been scrapped in favour of directional buttons. This has created more room for the individual keys, which are now slightly larger and therefore easier to press. Tactility is excellent and each key omits a reassuring clicking sound when pressed. 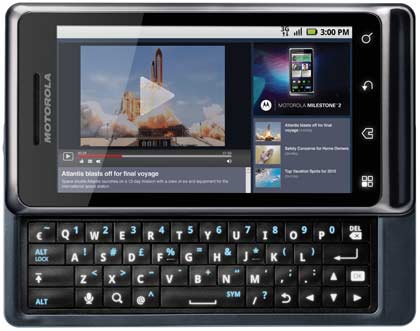 The Motorola Milestone 2's redesigned keyboard offers a much better typing experience than its predecessor.

Despite having a physical keyboard, the Motorola Milestone 2 also lets you use Swype text entry with the on-screen keyboard. Swype allows you to slide your fingers over the letters you want to type in a single motion, letting the software work out the word you're trying to write. Though it sounds awkward, Swype is very easy to pick up and surprisingly accurate. As with most on-screen keyboards, the software will learn as you type and add words you use regularly to its database.

The Motorola Milestone 2 has an excellent 3.7in capacitive touchscreen, making it slightly larger than the iPhone 4. While it has a lower resolution of the iPhone's display, it is very bright and clear and text looks crisp. However, the screen requires constant wiping to keep free of the grubby marks it picks up. We also aren't a fan of the touch-sensitive buttons that sit below the display. While the menu, home, back and search keys are backlit and generally responsive, they are easy to accidentally bump and can't be used to wake the phone when the screen is locked.