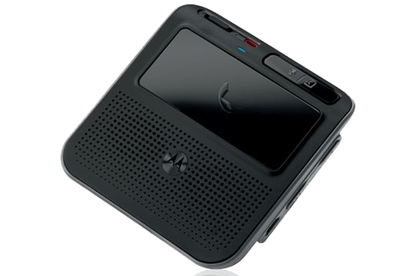 The Motorola T325 may lack some advanced features, but what it does, it does well. This Bluetooth speakerphone represents excellent value for money.

Motorola's T325 Bluetooth speakerphone has basic features but it is well designed and effortless to use. Incoming audio could use a volume boost, but calls are clear and the T325 functions well.

Designed to clip to a car sunvisor, the Motorola’s T325 Bluetooth speakerphone can also sit on a desk. Its square grey case has rounded edges and is dominated by a large call button. The call button is accompanied by a power switch, mute and phonebook button, and side-mounted volume keys.

Operation is dead simple — simply turn the T325 on by holding down the power switch for a second or two and the unit automatically enters pairing mode. Once paired with your phone, the T325 Bluetooth speakerphone will automatically download your phonebook, allowing it to read out the names of incoming callers. This is a one-off process the first time you pair your phone with the unit. The T325 will pair with any phone that has Bluetooth, including the iPhone.

Once connected, operating the Motorola T325 Bluetooth speakerphone mainly involves the call button. This button answers and rejects incoming calls, activates voice dialling (if your phone supports this function), and redials the last number you've called. The Motorola T325 also stores up to 25 of your most frequently dialled contacts, which can be accessed by pressing the mute/contacts button until you hear the name you want to dial. It isn't the quickest process, especially if the number you wish to call is at the end of the list, but it's effective for four or five frequently dialled phone numbers.

A neat feature is the automatic power off/on function. The Motorola T325 turns off when your phone is out of Bluetooth range, but turns on automatically as soon as you are in range again. Each time your phone connects to the T325, the unit announces the current battery level: very low, low, medium or high. Motorola claims the T325 will provide up to 17 hours of talk time on a full charge.

Call quality is excellent considering the price, and our callers were impressed with both the clarity and volume of outgoing audio. Incoming audio is a mixed bag; we had no troubles hearing a relatively clear voice, but the volume could use some extra punch despite the presence of dual speakers. Even at the loudest setting, we often struggled to hear with the car windows down.