MSI CX620 review: A laptop with a Blu-ray drive and dual graphics adapters 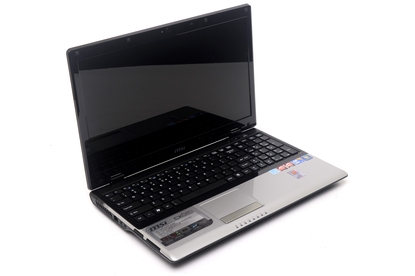 MSI's CX620 has a Blu-ray player and provides good performance overall, but it's not a great notebook. We'd revamp the keyboard, the layout of the ports and the screen, and give it a faster hard drive as well.

The MSI CX620 is a 15.6in notebook with hybrid graphics and a focus on home entertainment. It ships with a Blu-ray player and it features both an Intel HD graphics adapter and an ATI Mobility Radeon 5470 graphics adapter with 1GB of RAM. The difference between those two graphics adapters isn't great, and you won't want to buy this notebook for gaming — the only reason a second graphics card has been included is so that the notebook's HDMI port can be used to connect it to a big-screen TV (the Intel adapter only supports VGA).

The MSI CX620 has an attractive design and feels quite sturdy. Its keyboard has chiclet-style keys and a very similar layout to the keyboards on ASUS' 15in laptops, such as the K52Jr. The keyboard has a number pad and full-sized keys for the most part, and the keys have good travel and bounce, making them a joy to type with. However, we don't like the position of the Delete key, nor do we like the position of the arrow keys in between the regular keys and number pad — it makes it hard to find the arrow keys in the dark as everything feels the same. There is also an extra backslash key next to the spacebar, which we're not fond of (the backslash key, not the spacebar — we like spacebars).

The touchpad is a good size (78x48mm) and very responsive, but it doesn't support gestures; furthermore, we couldn't find anywhere in the mouse driver where we could change its edge scrolling function. This meant that when we used the right side of the touchpad, we inevitably ended up scrolling when we didn't want to.

On the inside, the MSI CX620 has an Intel Core i5-430M, 4GB of DDR3 SDRAM and a 640GB, 5400rpm hard drive. It's a good configuration that allows the CX620 to be used for regular office work, or more taxing tasks such as video editing and rendering. In our Blender 3D rendering and iTunes MP3 encoding, the MSI recorded 59sec and 1min 03sec, respectively. These are good results when compared to other laptops using the same CPU, such as the Acer Aspire 5741-434G50Mn. It also produced a relatively good time of 1hr 10min in our Xvid encoding test. The only test in which it was sluggish was the hard drive test: the 5400rpm, 640GB hard drive recorded a transfer rate of only 18.76 megabytes per second.

When using the notebook on your lap you'll quickly notice that it warms up noticeably on its left side (which isn't good if you're a lefty and you're using a mouse). This is where the heat sink resides and its warmth becomes quite uncomfortable after a few minutes of use. The left palm rest also becomes annoyingly warm while you type with the notebook on your lap.

To reduce the amount of heat that the notebook produces, you can change to the Intel HD graphics adapter, rather than using the slightly more powerful ATI adapter. You can change adapters by pressing the buttons located next to the power button. The '3D' button will switch to the ATI adapter while the button with the battery logo will switch to the Intel adapter. You can also configure the adapters so that the Intel adapter is used whenever it detects that the laptop is running on battery power.

As it stands, the only reason the second card has been included is to drive the HDMI port so that you can plug in the laptop to your TV if you want to watch Blu-ray movies in all their Full HD glory, for example.

The battery life of the CX620 will depend on the graphics adapter that is being used; there was a 28min difference between them in our tests. In our battery tests, we disable power management, enable Wi-Fi, maximise screen brightness and loop an Xvid-encoded video. The battery lasted 2hr 8min when the Intel adapter was being used and 1hr 40min when the ATI adapter was enabled. We'd recommend configuring the adapters so that the Intel one is used whenever the laptop detects that it has been unplugged.

Ports and slots around the edges of the CX620 include USB 2.0 (three), eSATA (shared with a USB 2.0 port), HDMI, microphone and headphone ports, VGA, Gigabit Ethernet, an SD card slot and an ExpressCard/34 slot. It also has a built-in DVD burner/Blu-ray player, a webcam and 802.11n Wi-Fi and Bluetooth. The layout of the ports is awkward. Only one USB port is located along the sides, with two of them located on the spine of the notebook, next to the HDMI and VGA ports. Even when used as a desktop replacement, where having ports located at the back helps manage cable clutter, the inclusion of only one USB 2.0 port on the sides of the laptop is inconvenient.

There are a few things about the MSI CX620 we'd like to change: the layout of the keyboard and the location of the USB 2.0 ports, and we'd give it a less glossy screen and install a faster hard drive. It's still a decent notebook for everyday tasks and home entertainment, but we wouldn't go out of our way to find it in a store.

MSI is no longer selling the CX620, but it is still available from some retailers. You can also pick up its successor, the CX623, which replaces the ATI Mobility Radeon 5470 with an NVIDIA GeForce G310M graphics adapter.