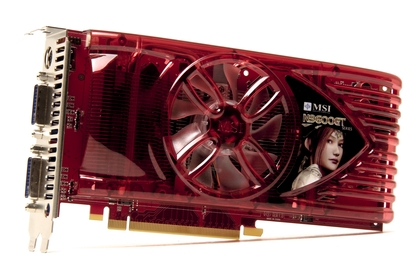 For the vast majority of gamers this card is going to be ideal. Those looking for a super powerful graphics card may have to wait or buy one of the high-end options from the previous series, but the MSI GeForce 9600GT is an excellent choice for decent mid-range gaming.

NVIDIA has taken yet another step forward with the release of its latest GPU (graphics processing unit), the GeForce 9600GT. Our first look at the new GPU came in the form of MSI's factory overclocked GeForce N9600GT (T2D512-OC) card, a slightly tweaked version of the reference board with a faster core and memory clock speed.

The 256-bit memory bus remains on par with the 8800GT and GTS 512MB cards, as does the 512MB of GDDR3 RAM. The standard 9600GT shares the same 900MHz (1800MHz effective) memory clock as the 8800GT, but our model has been bumped up to 950MHz (1900MHz). Subsequently, the memory throughput has increased to a maximum throughput of 60.8GBps. To substitute the lower number of stream processors NVIDIA has cranked up the shader clock to 1650MHz and the core clock runs at 700MHz, 50MHz faster than the standard speed of the 9600GT.

As a general rule we're used to seeing the high end version of a new series first. However, in this instance NVIDIA has chosen to release this mid-range card first, and will presumably launch its enthusiast cards down the track. Probably the best explanation for this is the fairly week state of the 8600 cards. They're cheap, but don't really cut it as a really viable option for those on a tight budget, not with the requirements of high-end DirectX 9 (DX9) games and certainly not the high-end DirectX 10 (DX10) games.

Overall the new mid-range option is a good choice for the price. Heavy gamers may want to wait for something a little more gutsy, but for this price bracket you can't go wrong.

This new range of cards from NVIDIA now include the HDMI adapter in the box and, like most new cards on the market, are HDCP compliant. This means they will work with a high-definition player and screen, an important point if you want to use your PC as a media player. Unfortunately NVIDIA's chip design still requires that an extra cable be connected to get audio through the HDMI connection, unlike ATI's HD2000 and HD3000 series, which use integrated digital audio.