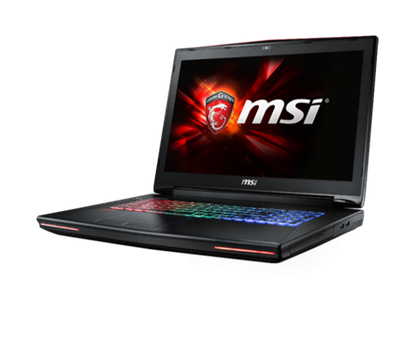 MSI's portable gaming monster does it all. It's incredibly fast at, well, everything and yet it runs quiet too. The screen is good, the peripherals and other features are good. It's expensive, but worth it!

It's hard to imagine a gaming laptop being that much better than a high-end gaming rig. And yet MSI's new beast does so in style.

With the arrival of Nvidia’s new Pascal-based mobile GPUs, we’re seeing an onslaught of high-end laptops that, for the first time, are able to give desktops a run for their money. We’re also witnessing the arrival of all-new features in gaming laptops, thanks to the prodigious power afforded by the high-end GTX 1080 chip. With more than twice the power of Nvidia’s previous flagship mobile GPU, the GTX 980M, the GTX 1080 paves the way for higher-res panels, higher refresh rates, and of course insane levels of performance.

Case in point is MSI’s new GT73 VR Titan. It pairs the new GTX 1080 mobile GPU with a 17.3-inch G-Sync panel that runs at 1920 x 1080 resolution at 120Hz, making it the first laptop we’ve laid our paws on that sports a high refresh-rate screen. As such, it should deliver crazy-smooth, high frame-rate gaming at an unprecedented level. (MSI also sells variants with IPS 4K display at 60Hz, if you prefer a higher resolution over high frame rates, but they cost $400-$500 more than this spec)

Panel aside, this is a pretty standard config for an ultra-loaded desktop replacement notebook. In addition to the GTX 1080, it includes an Intel Core i7-6820HK CPU: a mobile Skylake chip that runs at a 2.7GHz base clock with a 3.6GHz boost clock and sucks down only 45W of power. Yes, some gaming laptops go with an actual desktop part, like the i7-6700K stuffed inside the Origin EON17-X. But before you bristle at the notion of a mobile chip denigrating the purity of your battle station, consider that slightly lower clock speeds translate to much cooler operating temps, which translate to less noise.

The CPU is paired with 32GB of DDR4 running at 2,133MHz (note, our review unit had 64GB). A bit overkill, admittedly, but hey, you can load 5,000 photos into Photoshop if that’s your kind of workload.

On the storage front, MSI has endowed this notebook with a combination of drives that helps explain the staggering $4,999 price tag. It’s outfitted with two 512GB Samsung M.2 SM951 PCIe NVME SSDs in RAID 0 for the OS, as well as a 1TB 7,200RPM 2.5-inch hard drive. The two SSDs are good for up to 3GB/s of sequential read speeds, and about 2.6GB/s of sequential writes — in other words, it’s the fastest SSD combo money can buy right now.

In the face of such decadence, upgradability seems like a non-issue. Still, in a few years you might want to pop off the backplate and install some new gear. On our test model there was a sticker over the bottom cover that voids the warranty if broken, so upgrades aren’t really part of this notebook’s deal. That said, we did take the cover off and it looks like there’s only one empty bay with no wires leading to it. Only the RAM seems readily swappable - if adding to the 32GB is important to you!

When it comes to ports and outputs, the term “fully loaded” once again applies. On the back of the notebook, between two exhaust ports that wouldn’t look out of place on the Millennium Falcon, you’ll find Thunderbolt 3, HDMI, miniDisplayPort, and a Killer NIC. There are also a total of five USB 3.0 ports, audio outputs, an SD card reader, and a lock slot.

Naturally, since we’re living in the age of RGB lighting, this notebook has it. It’s similar to what Origin offers—instead of per-key lighting you can control three zones across the keyboard and number pad—but it also features a perimeter light around the trackpad as an additional zone. You can also select from a few presets such as Breathing and Wave, which are fun to watch.

The keyboard is made by SteelSeries and features island-style keys that rise above the deck a few millimeters and are soft to the touch. They were fine for typing, but I much prefer keys that are sunken down lower and feel like they are going into the body of the notebook when depressed. It’s a personal thing, I know.

The trackpad, on the other hand, is quite pleasing, and felt eerily accurate throughout my testing. It supports gestures too and is a breeze to use. But the left-and-right click buttons beneath the trackpad are probably this notebook’s biggest failing. They are incredibly stiff, and require way too much force to click.

Wireless connectivity includes both Bluetooth 4.1 as well as dual-band 802.11ac with MU-MIMO courtesy of the Killer Networking 1535 card. There’s also a thumping sound system that gets louder than we ever thought possible for a laptop. It has great bass and clear highs, and sounds fantastic. The battery is a smallish 75Whr unit, so you’ll need to tote the gigantic three-pound power brick for any usage that exceeds a few hours.