The MSI GX620 is adequate for gaming, but it's probably better suited to a casual (rather than hardcore) gamer who is looking for a desktop replacement notebook. It will run current games but not at a high detail level. Its overall performance is good but it could use one or two more USB 2.0 ports.

The MSI GX620 is a mid-range 15.4in gaming laptop — and it sure looks like it's built for gamers. It has brushed aluminium panels and a red trim, touch-sensitive multimedia shortcut buttons and a number pad. The W, A, S and D keys and the number pad's 8,4,6 and 2 keys all have arrows printed on them to remind you that they can be used to control your character while gaming. The big vent and clearly visible heat sink on the right side are indicators that this notebook is built to run taxing tasks, though it's by no means a high-end notebook. 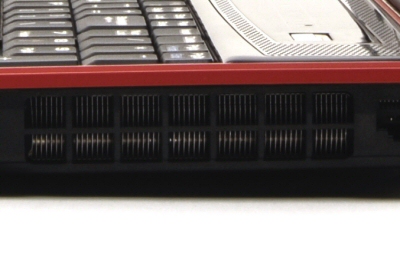 Whenever you see a vent this big, you know there must be something good under the hood.

On the inside, the MSI GX620 is relatively modest for a gaming notebook. You get a 2.4GHz Intel Core 2 Duo P8600 CPU, 4GB of DDR2 RAM and a 512MB NVIDIA GeForce 9600M GT graphics adapter. We say it's modest because you can pick up a notebook that does a much better job of running the latest games than the GX620 does, and for not much more money. The ASUS N61Vn, for example.

Apart from gaming, the GX620 can be used to efficiently run office applications, edit photos and videos and to display videos on your TV via HDMI. In fact, it's a pretty fast laptop when it comes to running office and multimedia applications. This was shown in our WorldBench 6 benchmark suit, in which the GX620 recorded a score of 98. It was particularly strong in the multitasking, Adobe Photoshop and Roxio VideoWave Movie Creator tests. Our Blender 3D and iTunes MP3 encoding tests, which stress the CPU rather than the whole system, recorded times of 1min 14sec and 1min 10sec, respectively. Both results are what we expect from a 2.4GHz CPU.

But while the performance of the GX620 is pretty good, the design of the notebook is hit and miss. For starters, there are only two dedicated USB 2.0 ports, and a third USB 2.0 port that is shared with the eSATA port. Even most netbooks have three dedicated USB 2.0 ports! We expect more from a 15.4in notebook that has a good deal more space than a netbook along its edges. Then there is the keyboard; it has mostly full-sized keys (18.5mm wide), which is good, but the period, slash, semi-colon and comma keys are all squished (13mm wide), which is bad. Coupled with a stiff spring-back action, typing on the GX620 for long periods can be tiresome and leave your documents laden with errors.

The screen is also not as good as we expected; it's not overly bright and looks dull for the most part, and its viewing angles are very narrow. These are traits that can be annoying while gaming.

However, the resolution of the screen is high — 1680x1050 pixels — and it's not glossy, so it won't reflect room lights. The width of the screen allows you to line up documents side by side, and the height of the screen means you can view Web pages more comfortably. Because the screen isn't overly bright and has narrow viewing angles, watching videos on it can be an uncomfortable experience. Fortunately, you can use the HDMI port to watch videos on a Full HD TV.

You can watch movies using the built-in DVD burner, or you can play downloaded content from the 320GB Western Digital Scorpio Blue hard drive (WD3200BEVT-22ZCT0). The hard drive recorded a transfer rate of 24.36 megabytes per second in our benchmarks, which is an average result for a notebook of this calibre. You have three interface choices when it comes to adding external storage: FireWire, USB 2.0 and eSATA (which will give you the best speeds when attaching an external drive).

At 2.7kg and with dimensions of 36x26x4.5cm (LxWxD), this notebook's too bulky to carry during a daily commute, and it can be uncomfortable to use on your lap. In our battery test, in which we disable power management, maximise the screen brightness, switch on the wireless radio and loop an Xvid-encoded video, the GX620 lasted 1hr 38min. This isn't a surprising result given the size of the screen and the power under the hood, and it's fine if you just want to use the notebook while sitting on your balcony or roaming around the house.

You can get a little more life out of it if you use 'Eco' mode, which is a power management setting that can be invoked by touching a dedicated button above the keyboard. The button cycles through various power management plans (categorised by task). The plans are identified by different icons instead of on-screen text. A Turbo button next to the Eco button can be used when the notebook is plugged into a mains outlet and in high-performance mode. It increased performance noticeably in our benchmarks, especially in Blender 3D, where it shaved 10 seconds off the time our test image took to render. We don't see any reason why you should run this notebook in normal mode when Turbo mode is so effective. 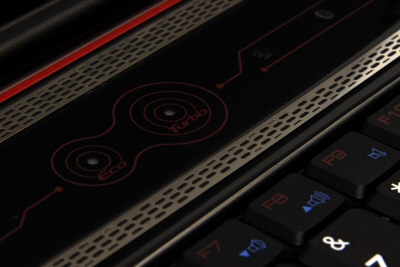 Turbo mode can boost performance by more than 10 per cent in some instances.

While playing games, you'll notice that the right palm rest gets warm, so after a long session your hand might get sweaty. Instead of using the number pad, you might want to use a mouse instead. The base doesn't get overly warm unless its vents are blocked (so it's best to always keep the GX620 on a flat and sturdy surface).

We think the GX620, rather than being a dedicated gaming notebook, is actually not a bad all-round desktop replacement system. However, it could use more USB 2.0 ports, a more comfortable keyboard and a better screen. It has a retail price of $1899, but you can get it for a few hundred dollars less if you shop around online.