On the whole, the MSI P55-GD80 is a motherboard for desktop PC enthusiasts with its long list of features and simple over-clocking. It is priced alright but MSI has not targeted the mainstream market with this model, leaving that role for lower-priced boards to penetrate the market later.

The MSI P55-GD80 PC motherboard {RRP: $276) supports mainstream Intel Core i5/i7 processors that use the Intel LGA1156 socket. It performs in line with what we expected, offers the features you'd expect and some more pleasantly surprising extras.

The motherboard has a full-ATX form factor to allow for a more spacious layout of onboard connectors. This one comes in black, unlike MSI's usual favourite colour (red). The thermals are well taken care of, with a heat-sink for the south-bridge and heat-pipe cooling around the processor socket.

LED activity indicators are present all over, including even a small LED display to show error number or processor temperature, and another LED to show the number of power phases (8 at maximum). Storage is well provided for - 1 PATA and 6 SATA ports at the side, 2 additional SATA ports, and 1 e-SATA port at the back. The MSI P55-GD80 board has four DDR3 RAM slots since the P55 chipset only supports dual-channel memory (triple-channel is an exclusive preserve of boards based on Intel's X58 chipset), and supports speeds upto 2133 MHz.

MSI has also tried to go all-out on this board and include three PCI-Express 2.0 slots, supporting both ATI CrossFireX and NVIDIA SLI. We say "tried" because the P55 chipset has a limitation - placing one card will provide a lane of x16 speeds, placing two will provide x8 to each card, and placing three will provide x8/x8/x4 respectively. This limitation will soon begin to matter with newer graphic cards that make use of the higher bandwidth.

The back panel has quite an assortment of input/output ports - 7 USB, two PS/2, two S/PDIF, 6 audio ports for 7.1 channel audio, two Gigabit LAN ports, an e-SATA and FireWire 400Mbps ports. Additional headers include a FireWire and 3 more USB headers. The GD80's touch panel makes it useful for enthusiasts, you can switch it on/off and reset directly. Additional buttons on the motherboard are the "Clear CMOS", "Base Clock" and "OC Genie". 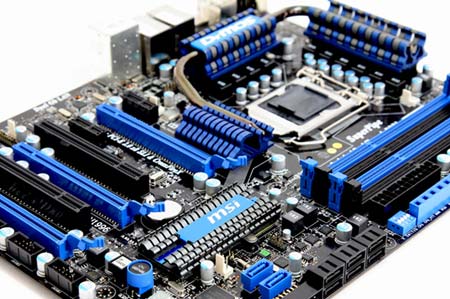 You can directly increase or decrease the system's FSB (Front Side Bus) to overclock while the system is in operation, using the "Base Clock" plus and minus buttons on the board. The OC Genie button requires a restart to take effect, but it provided great results by overclocking our Core i7 870 processor from 2.93 GHz to 3.98 GHz (an FSB and multiplier of 210MHz x 19 respectively) and still kept the system stable.

Those who'd like to do it the manual way can use the "Core Cell" options in the BIOS to get even more performance out of all system devices. Performance was good even at defaults, with a score of 8952 on PC Mark Vantage. All tests were run using a Thermal Take CPU cooler, Intel X25-M 80GB SSD, 2GB of DDR3 Kingston HyperX RAM and Radeon HD4870X2, powered by a Tagan BZ-1300 SMPS. Temperatures were very manageable all through.

The only thing one can moan about here, is that by paying a price of about 30 percent more, you can buy a motherboard with support for technologies that could future-proof you slightly better. This includes newer H55/H57 motherboards that support Intel's latest graphics-integrated processors, and the Asus P7P55D-E Premium that supports USB 3.0 and SATA 6Gbps for storage systems with faster data transfer.