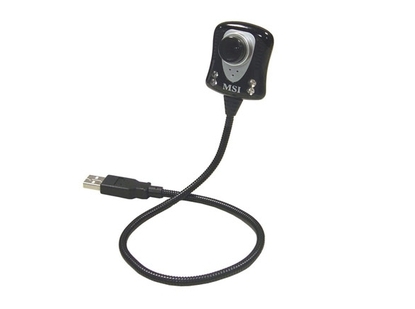 If you've ever encountered problems positioning your webcam, with it not quite being able to achieve those difficult angles you require, MSI has a solution. The Starcam Mini is a novel little device: a small webcam mounted on to the end of a 35cm semi-flexible arm that can be wrapped around and fixed to almost anything.

The Starcam Mini is a good all-in-one solution for anyone wanting to buy a webcam. Firstly, it's simple to use. Installing the software and drivers using the included CD takes only a matter of minutes. Once this is done the camera can be used with any standard software such as MSN Messenger or Skype. The image quality of the camera certainly isn't the best, so we had to play around with the settings in MSN Messenger before we got an adequate picture. Using standard settings the picture is too dark and the colours are washed out, but this was much improved after we altered brightness and contrast levels.

Other than the disappointing colours, the Starcam Mini holds up fairly well with its 640 x 480 sensor. Though the frame rate is a little slow, it never got to the point where the picture became disfigured or indistinguishable. One nice inclusion is the addition of four infrared LEDs on the front of the camera. This seems like a gimmick, but they actually offer quite good night vision capabilities and make it suitable for any nocturnal activity.

One of the standout elements of the product is the aforementioned flexible arm. This is the only means of mounting the webcam (there is no clip or attachment) and we found it easy to use. The cable can be wrapped around any nearby object, such as a desk fitting, table leg, or even an arm, and will perch securely; though a few rubber bands might be handy. MSI include a handy USB extension cable for more distant placement.

The final feature of the webcam is its use as a surveillance camera. MSI include their VideoSecurity software which offers basic motion detection functions. The image window can be divided into up to five separate regions, which the software will then monitor for movement. Should this be detected, the software will then either play an alarm sound, start recording video or forward images to an email address. This is all incredibly easy to set up, and with the camera's small size and flexible cable makes it the ideal tool for spying.

Overall the Starcam Mini offers a good deal of features in an easy to use and low cost package. Its one major let down is the relatively poor quality of its video, but this can be improved by some software tinkering.