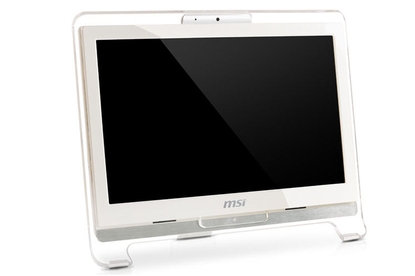 MSI's Wind Top AE1900 is an all-in-one PC that won't take up much space on a desk. It has a touch screen and a built-in DVD burner, and it can be used for basic tasks.

MSI's Wind Top AE1900 (model number MS-6638) is an all-in-one PC with an 18.5in touch screen. It has an Intel Atom CPU (the same type of processor used in netbooks), so it's not very powerful, but it can be used for basic tasks such as word processing, Web browsing, viewing videos and listening to music.

The MSI Wind Top AE1900 (MS-6638) is designed so that it doesn't take up too much space, and so that it's easy to use. It takes up about the same amount of space as a typical 19in widescreen monitor, although it sits on the desk more like a picture frame than a monitor. It will sit sturdily on a desk, as long as you don't intend to have a tablecloth underneath it — its rubber stops need something to grip.

When you first boot up the MSI Wind Top AE1900, you are greeted with a customised interface called Wind Touch. This interface has four sections: work, fun, tool and Web. Each sections contains big icons for all the applications it houses (for example, 'work' contains Gimp 2, WordPad and other applications, while 'Web' contains Internet Explorer, Windows Live Messenger and Skype), which makes them easy to launch with your finger or the stylus. Unfortunately, the interface is not customisable, which means you can't add your own favourite applications to its sections. You can, however, remove ones that you don't want to show up. There also isn't a section from which you can browse and launch your media files (except for the MSI Easy Viewer in the 'fun' section, which lets you view photos). For an all-in-one PC with a touch screen, not being able to customise the interface is a major drawback. 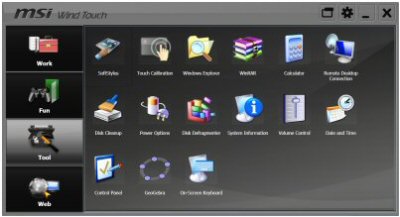 MSI Wind Touch is the first thing you see when the Wind Top loads Windows. It's not a fully customisable interface.

Despite only having an Intel Atom 230 CPU (which runs at 1.6GHz and has a 533Mhz front side bus), integrated Intel GMA 950 graphics and 1GB of RAM (the maximum, as it is not upgradeable), the Wind Top AE1900 ran briskly during our tests. It launched applications quickly, switched between them without lag, and displayed standard-definition videos without any stuttering or tearing. That doesn't mean you can use the Wind Top for CPU-intensive tasks such as MP3 encoding — it took 8min 18sec to encode 53min worth of WAV files to 192Kbps MP3s. This is better than the average time it takes a netbook to complete this task

Ports and slots are located along the left edge and the rear the Wind Top AE1900, and these comprise four USB 2.0 ports, an SD card slot, microphone and headphone jacks, and a Gigabit Ethernet port. The unit also has 802.11n WiFi, a webcam and a built-in microphone. We wish the audio ports were located at the front or along the sides.

Basically, you get as much connectivity as you would in a netbook, except you get one extra USB port and faster networking than most netbooks. You don't get Bluetooth, however. The Wind Top AE1900 does have a built-in DVD burner, which is something the other Intel Atom–based all-in-one PC we have seen — the ASUS Eee Top ET1602 — lacks.

Before you can use the Wind Top AE1900 comfortably, the touch screen needs to be calibrated, and the process to do this is not intuitive. You have to click on the 'touch calibration' option in the MSI Wind Touch's custom user interface, but this does not launch a new window with the application. Instead it launches a System Tray utility that you have to double click on to actually open it. Then you click on the 'calibration' option and rest the stylus on the green targets in order to get the pointer on track. That part's easy, and after you complete it the stylus and pointer align perfectly — even at the far edges of the screen, which means you won't have trouble hitting the Start menu button, the close window button on a maximised window, and the clock settings on the Taskbar.

The touch screen is frustrating when resizing windows and dragging objects. When using the stylus, often it would not grab the corner of a window in order to make it bigger or smaller, and just moved off the drag point and clicked on what was underneath the window. The same happens when dragging windows across the screen. These tasks work a little better when using a finger rather than the supplied pointer.

It's best to use the touch screen in a kiosk manner; that is, you can use it to launch files and do some navigating in a Web browser without using the keyboard and mouse. However, it doesn't support gestures. Furthermore, scrolling can be difficult as the screen sometimes tends to stop being responsive to your finger or the stylus, which is annoying on long pages. Writing on the screen also isn't comfortable as you can't rest your hand on the screen while you write. All things considered, the touch screen on this PC is more of a novelty than an aid to the user.

The ASUS Eee Top's touch screen is a little better then the Wind Top's, but the ASUS has a smaller screen and it lacks a DVD burner, so it's not as good as the Wind Top overall. If a small, all-in-one computer with a touch screen is what you are after, and you don't have the money to opt for an HP Touchsmart, then the MSI Wind Top AE1900 is a decent alternative.