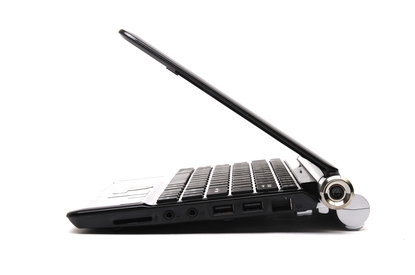 The little MSI Wind U160DX netbook builds on the company's good reputation in this market segment. This model performed well in our tests, has good battery life, and most importantly, it's thin, light and well priced.

The MSI Wind U160DX is slightly different in design compared to past 10.1in Wind netbooks that we've reviewed, but it still retains the fast performance that MSI is well known for. While it's only a simple netbook with a standard configuration, it achieved above-average results in our tests, meaning it's a finely tuned Internet-browsing, photo-viewing and document-creating machine.

Indeed, while it's performance in our tests was very good, it's a still a netbook after all, so the main tasks you'll be able to use it for are Web browsing, social networking, writing documents, listening to music, viewing photos and watching standard-definition videos. You won't be able to do much more with it, and you shouldn't entertain thoughts of serious multitasking.

In our Blender 3D rendering and iTunes MP3 encoding tests, the MSI Wind U160DX recorded times of 6min 42sec and 7min 43sec, respectively. These times are a lot better than what the Samsung NF210 recorded in these tests.

Considering the MSI Wind U160DX costs only $399, this performance is very impressive. The MSI impresses in other areas, too; in our battery rundown test, in which we disable power management, enable Wi-Fi, maximise screen brightness and loop an Xvid-enabled video, its 6-cell battery lasted a very respectable 4hr 59min.

It's definitely not as good as the Samsung, which lasted 6hr 10min in the same test, but as the MSI is faster, cheaper, and a little lighter, we don't mind too much. A lot more life can be obtained from the battery when a power management plan is implemented.

We love the thin profile of the Wind U160DX, which has an approximately 15mm thick chassis, and it only weighs around 1.25kg. Its battery is large and hangs low over the spine of the netbook, giving you a bit of a holding point when carrying it around. However, the battery's little rubber feet, which help it grip while sitting on a desk, dig in to you when you use it on your lap and can therefore be uncomfortable.

Unlike previous MSI Wind netbooks, such as the Millions Special Edition U135, the U160DX doesn't suffer from balance problems. While using the netbook on your lap, it won't fall back when you take your hands off the palmrest. This is due, in part, to the design of the battery, which gives the netbook a better centre of gravity.

We really like the keyboard, which has isolated keys that are of a good size and feel good to press. Like all netbooks though, it's still cramped to type with for long periods of time; this is not due to the size of the keys and the quality of the keyboard, but instead to the width of the netbook itself (263mm) and the small palmrest (56mm). The touchpad is small and adequate (66x38mm), but it doesn't have a border around it. Instead, it's differentiated from the palmrest with little bumps, which you'll probably hate at first, but you'll get used to them. You'll want to remove the stickers from either side of the touchpad, as they can get in the way.

The screen is standard for a netbook. It's 10.1in in size, has a 1024x600 resolution and it's glossy. It can be a pain to see comfortably outdoors in bright light, but it has enough brightness to allow you to see your work most of the time, and because it's small you can angle it away from bothersome lights a lot easier than a bigger screen.

The chassis gets a little warm after you've been using the netbook for a while, and especially if you're visiting Web sites that take up a lot of the CPU (such as sites with lots of Flash ads for example). A fan kicks in now and then to keep the CPU cool and it's quite audible.

Overall, we really like the MSI Wind U160DX. Despite being a little uncomfortable to use on your lap, it supplies relatively good speed, it has good battery life, and above all, it's very well priced. It's perfect for students and travellers who want a small and basic computer.