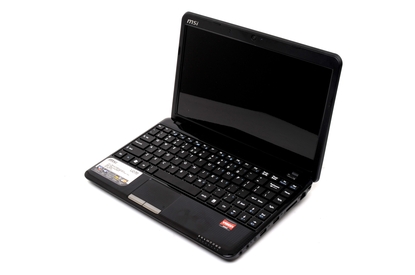 The MSI Wind U270 offers more speed than a typical netbook thanks to its AMD Fusion APU. It comes with good features, such as USB 3.0 and Gigabit, and it's affordable. We just wish it had more of a streamlined design and that it looked better.

The 12.1in MSI Wind U270 notebook makes use of AMD's Fusion E-350 accelerated processing unit (APU) to offer better-than-usual all-round performance in a form factor that's not much bigger than a typical netbook. In particular, the Fusion APU gives the U270 better credentials than most netbooks when it comes to multimedia tasks, and you can easily hook it up to TV using HDMI. The other selling point of this laptop is the inclusion of USB 3.0.

Overall the MSI Wind U270 has a strong configuration; not only do you get the 1.6GHz AMD E-350 Fusion APU and USB 3.0 port, you also get a huge 500GB hard drive (5400rpm), 4GB of SDRAM and integrated AMD Radeon HD 6310 graphics. All this costs only $549, and coupled with the small 11.6in size of the netbook, it represents incredible value for money if you want something with plenty of mobility. However, it's not quite as nice as other Fusion laptops we've seen, such as the Sony VAIO YB Series and Toshiba NB550D, so what you gain in specifications and performance you give up in aesthetics and build quality.

In our performance tests, the MSI U270 proved to be quick, like most MSI laptops we've seen recently. Its times of 2min 41sec and 3min 2sec in the Blender 3D rendering and iTunes MP3 encoding tests are faster than what the Sony VAIO YB Series could muster — the Sony laptop uses the same APU, but it has only 2GB of RAM in it. The MSI was also faster in our video transcoding test, where it took 2hr 55min to transcode a DVD file into a 1.5GB Xvid file — the Sony took 3hr 34min. The MSI's hard drive also put up a good showing in our tests, recording a transfer rate of 25.85 megabytes per second (MBps), which is a relatively speedy result for a netbook.

The overall results of the U270 are very good, but it still doesn't take away form the fact that the Fusion APU can feel as sluggish as the Intel Atom in a regular netbook in some circumstances. If you are browsing the Web and come across a site that has a lot of Flash ads, for example, it can take up half the CPU and things will slow down noticeably. This is despite the Fusion E-350 having two cores. In a nutshell, the U270 is better than a typical 10in netbook that runs a dual-core Intel Atom CPU (such as the Acer Aspire One Happy), but it will still feel sluggish in certain situations. Like a netbook, you can use it for basic Web browsing, office document creation, viewing photos, listening to music and watching videos.

Unlike a netbook though, you can plug it in to a big-screen TV using HDMI and watch high-definition videos off it. It's the AMD Radeon HD 6310 integrated graphics that allow this to happen and they are much more powerful graphics than you would find in a typical netbook. In 3DMark06, these graphics recorded 2313 marks; once again this is faster than the Sony. A typical netbook with Intel graphics records around 150 marks in 3DMark06, so you can see that the AMD is miles better in this regard.

The MSI worked fine when connected to our TV and we think it can make a nice little makeshift media centre for viewing videos and listening to music. Its 500GB hard drive also allows you to store a decent amount of media on it so you won't have to make extensive use of external hard drives. But if you did, you'd be able to take advantage of USB 3.0 and transfer files a lot quicker than you would be able to with a regular USB 2.0 drive.

Physically, the U270 doesn't have the style of a Sony or a Toshiba, and it feels and looks a lot bulkier. It weighs close to 1.5kg, so it's comparatively heavy, but this is mostly due to the big battery on the spine and the slightly bigger screen. It's a 58 Watt-hour battery that lasted 3hr 19min in our rundown test, in which we disable power management, enable Wi-Fi, maximise screen brightness and loop an Xvid-encoded video. It's a little shorter than the Sony's time of 3hr 33min, but it's still a decent result.

After using the U270 on your lap for an extensive period of time, you will notice some heat coming from the left side of its chassis near the heat sink. It's enough to make things uncomfortable. Furthermore, some heat travels up through the palmrest.

The keyboard on the U270 has isolated keys and they are of a good size. Coupled with a 60mm palmrest, it makes for a comfortable typing experience. Unlike the keyboard on other MSI laptops, such as the MSI GE620, the keys don't have to be hit hard to leave their mark, but they still feel a little rigid and could stand to be softer and have better bounce. The touchpad is decent and we didn't have any problems navigating with it. The screen is too glossy and has poor vertical viewing angles (like most inexpensive laptops on the market), and it has a native resolution of 1366x768.

Around the MSI's edges, you will find a lot of good stuff: Three USB 2.0 ports (one of them is also a USB 3.0 port), Gigabit Ethernet, HDMI, VGA, an SD card slot, and microphone and headphone ports. You also get a webcam, 802.11n Wi-Fi and Bluetooth.

The MSI U270 netbook represents good value for money. Like most MSI laptops, its performance is what stands out most. While it doesn't look ugly, it's definitely not what you call a good looking netbook. What you pay for mostly is a good configuration in a fairly generic-looking (and feeling) body. If you want good looks, then you are better off spending more money on the Sony and Toshiba Fusion models that we have previously reviewed.