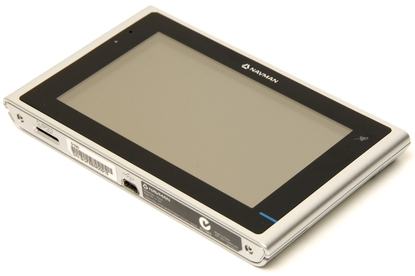 The Navman S100 GPS unit does lack many advanced features, like Bluetooth, FM transmission and built-in traffic capabilities, but it still provides an excellent navigational experience on the whole. This device is excellent value for money.

The Navman S100 portable GPS unit is almost identical in design to both the Navman S150 and the top of the range Navman S300T. The S100 has a sleek, brushed metal case and an attractive gloss black bezel surrounding the display and it is one of the thinnest portable GPS units we've reviewed.

Most operations centre on the Navman S100's touch screen, though there is a power button at the top and two touch-sensitive buttons to the right of the screen: a main menu button and an instant location capture button. The responsiveness of the buttons is not great though, and we often found ourselves having to press them multiple times to get a response.

The Navman S100 employs a scrollable “glide” touch screen. Instead of the menus being multiple pages, you press the touch screen with your thumb then hold and drag upwards to reveal the rest of the menu. The aim was to provide a better overall user experience, but its frustrating having to drag your finger up and down the screen while operating the unit in the car. In this respect, the traditional method of tapping an icon on the display is a better option.

Despite the scrollable interface, the layout and design of the Navman S100's user interface is certainly user-friendly. Three key search methods include 'go', 'find' and 'explore'. The 'go' menu allows you to enter an address, 'find' allows you to search for specific places or businesses while 'explore' searches an area for points of interest (POIs). Instead of address entry being a three-stage process (city, street then house number), you simply type the full address in one screen and the Navman S100 will present a list of options. This is much faster and more convenient than having to wade through multiple screens.

The Navman S100's map screen is clear and concise. Tapping the left edge of the screen brings up a scrollable options menu. While you’re on a route, this displays a list of all the turns on your route, a complete overview of the route and information about the route including distance to go to destination, ETA and average speed. We appreciated the list of turns, which display a different icon for each type of turn. You can also customise what’s displayed on the top right corner of the map display, choosing from distance remaining, remaining time to go, km/h, ETA and the current time.

The Navman S100 lacks 3D landmarks and 3D junction views (two features present in the more expensive S150 and S300T models), but lane guidance is included. This feature provides a much clearer image when exiting major intersections, freeways and multiple lane roads. The S100 uses NAVTEQ maps and we didn’t have too many issues during testing, aside from one instance where the unit directed us to turn right despite a no right turn sign. Australian text-to-speech pronunciations are excellent and even long street names are clearly spoken.