We wanted to like this ADSL2+ router with 3G backup support, but it did its best to drive us crazy. It wasn't reliable during our tests and its Web interface gave us plenty of problems when trying to set up a wireless network. We'd wait until new firmware comes out before considering it.

Netcomm's 3G15Wn is an ADSL2+ modem and wireless router that has support for 3G modems. You can plug in a supported USB-based 3G dongle to distribute your wireless broadband connection to several computers and use it as a backup in case your ADSL2+ connection drops out.

The rear of the Netcomm 3G15Wn has a 10/100 4-port Ethernet switch, a USB port and a phone jack for your ADSL2+ line. It supports 802.11n wireless networking and has an antenna sticking out of the rear. Overall, it’s a big unit with vent holes on either side and it doesn’t get too warm. You can’t stand it up or wall-mount it, so you’ll have to place it flat on a table or on top of your PC.

Setting up the modem is fairly simple. Using the Quick Setup feature in the modem’s Web interface, you can select whether of not you want to configure an ADSL connection, 3G, or ADSL with 3G backup. To set up the ADSL connection, all you have to is type in your username and password; to set up the 3G account, all you have to do is select your profile and leave the authentication method on auto unless you need a username and password to authenticate with your 3G carrier.

It should be noted that the 3G15Wn has limited 3G dongle support at the moment and it won’t work with all the devices that currently on the market. Netcomm’s Web site has a list of modem manufacturers that the 3G15Wn supports, which makes it hard to identify compatible devices from the Australian carriers. A better solution would be to list all the model names according to carrier, such as 3 Mobile’s E160 or Telstra’s Turbo 21 USB modem. 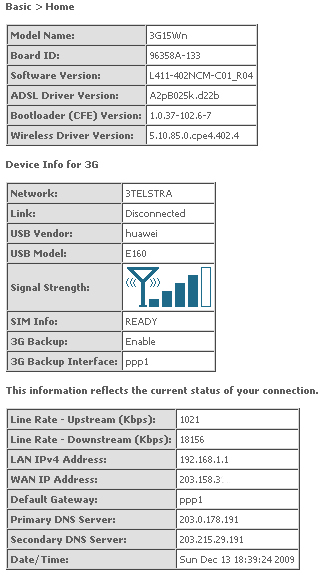 The router's status page shows you which Internet connection is currently active.

When the ADSL2+ connection drops out, the failover to 3G isn't seamless. The connected 3G USB stick took around 30sec to kick in during our tests, but this might vary depending on how good the 3G signal is in your area. You will notice the drop-out if it occurs while you are loading a page or transferring a file.

The router initiates the failover by pinging an IP address that you give it (such as the IP of your ISP) and will switch to the 3G USB device if it can't reach that IP. The Internet status light on the front of the router turns red when the ADSL2+ connection is not active, and doesn't go green when the 3G device takes over. This means that you can't really tell if you're on the Internet unless you try loading a Web page. The ADSL light keeps flashing when the ADSL2+ connection is down.

The USB port can be used for connecting a printer or a USB-based storage device. To connect to a USB drive, you need to enter the NetBIOS name of the router followed by the name of the USB drive in the Windows Run dialog. For us, this was \\3G15Wn\USB-Storage. We could add and remove files easily. There are no settings to play with for this feature; anyone who has access to the wired or wireless networks will have read and write access to connected drives.

Instability was a big problem. While the router ran fine for the last 24 hours of our test period, the first 72 hours were littered with dropped ADSL2+ and LAN connections. These dropouts occurred almost every hour. It didn’t make a difference what the workload was. Whether we were downloading torrents at a speed of 700 kilobytes per second or just using the Internet to load news sites, the router would drop the Internet and LAN connections without prejudice. It’s a problem we haven’t experienced with any other modem/router from our test location with our test PC; it suffered the same problem whether we used DHCP or static IPs on our network.

At the time of writing, no firmware was listed on Netcomm’s site for the 3G15Wn, so we couldn’t upgrade, nor use an earlier version of the firmware to see if that would fix the problem.

The Web interface of the 3G15Wn is hard to use if you don’t know much about routers; it doesn’t have any helpful labels or explanations for any of its features. Some features are also implemented poorly, such as port forwarding. You can add or delete rules but you can’t edit them, which is a pain if you want to only change an IP address for a particular port.

Setting up the wireless network was a royal pain in the behind, as we were met with a dialog box telling us as that "the SSID should not be empty or longer than 32 characters", despite the fact that the main SSID field was not empty. The router supports three guest SSIDs and we found that we could get rid of that dialog box and change the main SSID by filling out all of the guest SSIDs and specifying a maximum number of clients that could connect to them. 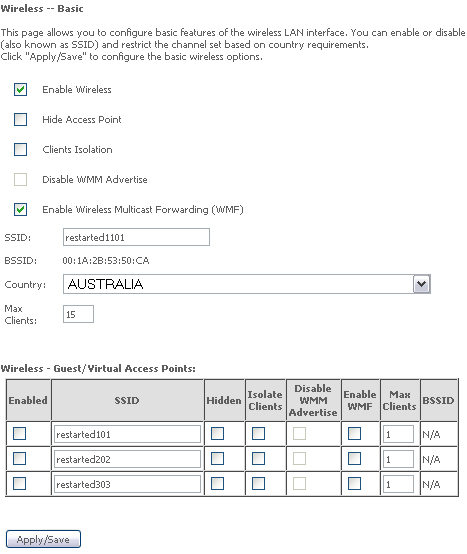 We couldn't change the router's SSID unless we also filled in the three guest SSIDs.

At some point during our tests, the guest SSIDs that we entered disappeared. To change the main SSID, we had to once again enter three new guest SSIDs; configuring the security settings for each guest SSID was a waste of time. Each time we applied security for a guest SSID, the network went right back to being open.

Our attempts to diable the wireless access point were met with an error message pertaining to the SSID.

The wireless section contains an example of what makes the interface hard to use. There is a feature called "Enable Wireless Multicast Forwarding (WMF)" which stops the router from broadcasting its wireless multimedia (WMM) functionality. Yet further down on the same page where the guest SSIDs can be configured, there is a feature called "Enable WMF", which performs the same function. While it’s a feature that probably won’t be used by most people, standardisation of terms would go a long way to making the interface less confusing.

The 802.11n wireless access point supplied a speed of up to 4.6 megabytes per second (MBps) during our short-range tests and 2.72MBps from 10m. These are sluggish results and are due to the router not connecting to our USB-based Netcomm 802.11n wireless adapter at 300Mbps, but instead at 60-70Mbps.

Overall, the 3G15Wn seems like it isn’t ready for prime time just yet. It needs a firmware update to iron out its interface and stability problems, as well as more extensive and clearer 3G modem support. It performed its main function well — switching to a 3G connection when the ADSL wasn’t available and vice versa — but at the end of the day, the 3G15Wn produced a frustrating user experience.