A simple Netgear 802.11n router with a built in ADSL2+ modem Netgear's DGN1000 is an 802.11n wireless router with a built-in ADSL2+ modem. It's a small and good looking unit that's designed for basic tasks such as Internet sharing and standard-definition video streaming across your LAN. Consider it if you want a simple wireless router to use in an apartment or small house.

The Netgear N150 Wireless Modem Router DGN1000 is a simple ADSL2+ modem/router with an 802.11n wireless access point. It also has four 10/100 Ethernet ports, a built-in firewall, parental filters and it even has physical buttons for controlling the state of the wireless network.

It isn't a full-blown 802.11n wireless router (its connection speed tops out at 150 megabits per second rather than 300Mbs) and it only has one antenna, but it's a useful wireless router if all you want to do is share an ADSL2+ connection across a handful of devices in an apartment or small house.

Its wireless networking speed won't make it the talk of the town, and this was shown in our 2m and 10m range tests, in which the router recorded average transfer rates of 3.55 megabytes per second and 2.98MBps respectively. Its no match for a high-end router such as Netgear's own DGND3300 oor Belkin's N+ (F5D8635au4A), but you can use it for streaming video to a device like the the Netgear Digital Entertainer EVA 8000 as long as the distance between the units is not more than 10m and you aren't streaming HD files.

The modem in the DGN1000 performed very well from our test location, which uses an iiNet ADSL2+ connection. We averaged a download speed of 16.595Mbps and an upload speed of 845 kilobits per second using PC World's broadband speed test. The download speed is even better than the one we achieved with Netgear's DGND3300, but the upload speed was a little sluggish.

Setting up the modem was a simple task: all we had to do was enter our username and password. The modem detected all the connection settings on its own. When you first install the modem and log in to its interface, it will check for updates to its firmware — it does this even before you get a chance to configure it. Just cancel this and perform the upgrade after you've set everything up. It's a good feature for users who don't feel comfortable manually upgrading the router's firmware. 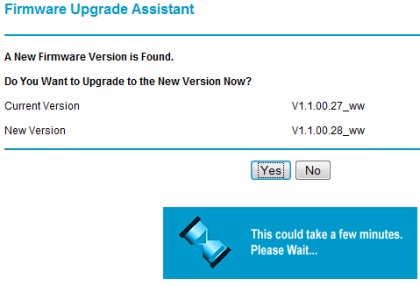 The upgrade assistant looks like this when it's trying to download a new firmware version. If it takes more than a few minutes, you might have to refresh your browser window and try again (as we did).

Once the file has been found, the upgrade process will start. Don't interrupt the router during this process.

When it's finished, this cryptic message will appear telling you to look at the LEDs on the router. Hit OK to go back into the router's Web configuration page.

If you're a parent, you might appreciate the easy to use keyword and URL filtering, which can be used to block access to any sites or search terms that you don't want your kids to be exposed to. Users who try to access a prohibited site (or a site that features a flagged keyword) will end up with a big notice on their screen telling them that access has been denied. 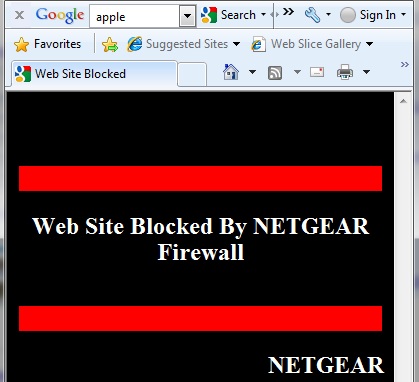 If you set up a static IP network, you can add your own PC as a trusted computer so it won't be affected by the filters (but don't tell your kids that). If you want to be super-sneaky, you can even check the router's log to see if anyone has been searching for the terms you've flagged.

While the parental filters are easy to implement, the forwarding of ports (if you want to efficiently use BitTorrent, for example) is quite the opposite. Port forwarding can be found in the 'Firewall Rules' section of the Web interface, and you can only add rules that are already in the 'Service' drop-down list. In order to forward a port that's not on the list, you must first visit the 'Services' part of the Web interface to enter it, then go back to the Firewall Rules to add it for your designated IP address.

Apart from that, the Web interface is easy to use overall and it's the same layout as every other Netgear router we've seen over the last few years; if you've used a Netgear before, you'll know the score. Other useful features of the router include support for Dynamic DNS service (DynDNS.org), one-touch wireless networking security, and a button so you can switch off the wireless portion of the router when you're not using it.

All up, the N150 Wireless Modem Router DGN1000 is a simple ADSL2+ modem/router with a nice physical design (although its green LEDs are too bright for our liking) and it can be wall mounted. We think it's perfect for an apartment or small house; it's useful for distributing an ADSL2+ connection, as well as for basic video streaming, and it has effective keyword and URL filters that will make your kids hate you, so use them wisely.