Netgear's RangeMax ADSL2+ modem and dual-band wireless router is well suited to anyone who has a lot of devices capable of running at 5GHz. It's easy to use and it delivered reliable performance during our tests. And it also offers a couple of nifty features: it's USB storage port is great for sharing data over your network, and its Internet filter is perfect for parents who want to restrict the online content their children can access.

Netgear’s RangeMax Dual Band Wireless-N Modem Router (DGND3300v2) is an all-in-one wireless router with a built in ADSL2+ modem. It has a dual-band capability that allows it to run 2.4GHz and 5GHz wireless networks simultaneously; this can be a very useful feature if you want to separate video streaming traffic from the rest of your network, for example. However, we were disappointed with the implementation of the dual-band feature as the 2.4GHz network is limited to a speed of 54Mbps while the 5GHz network runs at 270Mbps.

Setup and ease of use

For supreme ease of setup, the Netgear RangeMax DGND3300v2 can be configured using the wizard on the supplied CD, which guides you through the hardware setup as well as the requisite settings for the wireless network and your Internet account. The Web interface can also be used to configure the router if you know what you’re doing, and if you’ve used a Netgear router before, then you’ll be in familiar territory as its layout hasn’t changed in recent years — it still relies on frames. On the router we tested, the settings in the left frame are logically laid out and the visible glossary in the right frame can be useful. Because there’s a frame at the top of the screen showing the router’s name, viewing the Web interface on a netbook with 600 lines of vertical resolution may be a difficult experience. It’s easy to view on a regular PC or notebook screen.

We love the fact that the wireless networking settings — the wireless mode, network names (SSIDs) and encryption — can all be set from the same page. It’s much easier to set up than the Belkin Double N+ Wireless Router (F6D6230au4), for example, which has settings on four separate pages. Furthermore, the Netgear router doesn’t need to be restarted when changes to the wireless settings are implemented. 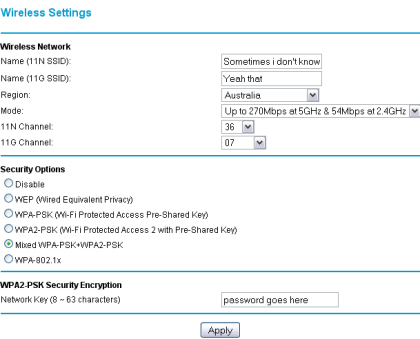 Setting up the wireless network is easy, as all the settings are on one page

Like all good routers, the Netgear RangeMax Dual Band Wireless-N Modem Router (yes, it’s a mouthful) has a built-in firewall and port-forwarding, and it even includes a very simple keyword and URL filter. When it’s enabled, users will get a clear warning every time they try to search for content that’s been flagged; making it perfect for parents who want to take responsibility for what their family can access online. Plus you can set up email alerts so you can monitor the Internet activity and filter online content from work, on the road or at home.

The rear of the router has a USB 2.0 port that can be used to attach either a USB key or external hard drive, so you can share the content on these devices network-wide. The ReadyShare feature is quite simple to use, yet it also offers advanced features too. When you plug in a device, it will show up in Windows as a network location called ReadyShare. You can access it in the same way that you access a shared hard drive on any Windows-based computer on your network (Netgear says the router is also Mac compatible). You can also map the drive permanently on each of your systems by using the ReadyShare Connect utility that is on the supplied CD-ROM. 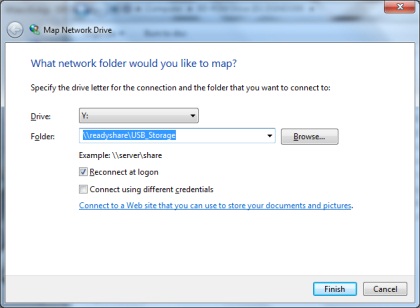 The ReadyShare Connect utility can be used to map the network drive to your system.

For remote access to your shared drive, you can enable FTP via the Internet. Password protection can be implemented for read and write tasks separately, and you can set passwords for specific folders, which means you can set up folders for different users too. This differs from the cumbersome implementation of the storage port on Belkin’s ADSL2+ storage router, which doesn’t have any access controls.

As an ADSL2+ modem, the Rangemax DGND3300v2 isn’t a stellar performer. In our tests using PC World’s Broadband Speed Test, it attained a peak download speed of 15.7 megabits per second (Mbps) and an average upload speed of 967 kilobits per second (Kbps). The Belkin N+ Wireless ADSL2+ Modem-Router peaked at 17Mbps for downloads and 1Mbps for uploads. Testing from multiple locations on the iiNet network confirmed that speeds were 1.3-1.5Mbps slower than we expected for downloads and 40-100Kbps slower for uploads.

In our wireless tests, the router proved to be fast over long distances. From 15 metres, file transfers using the 5GHz network averaged 6.59 megabytes per second (MBps) — even faster than the Netgear RangeMax WNDR3700, which averaged 4.46MBps, and the Belkin Double N+, which averaged 5.61MBps in the same test. The same test from 2 metres away averaged 6.41MBps.

This result bodes well for those of you who reside in a relatively large home and want to stream video wirelessly from your server in the bedroom to a media device attached to your TV in the lounge, for example. We conducted these tests while simultaneously streaming video over the 2.4GHz and the speeds were unchanged.

Netgear’s RangeMax Dual Band Wireless-N Modem Router (DGND3300v2) is a decent all-in-one unit that’s easy to set up and it possesses many useful features. We love the ReadyShare USB port, the built-in keyword and URL filter is so simple any parent can use it; and the wireless speed over a long distance is still very fast. However, we recommend buying this router if the majority of your 802.11n devices are capable of running at 5GHz; 2.4GHz-based 802.11n adapters won’t run to their full potential while the 5GHz network is running at full speed.