It may be expensive, but there's still plenty of value in the ReadyNAS Pro for the medium to large business. The ability to set and forget the NAS device is great for IT admins, and the read/write performance is certainly beneficial for multiple simultaneous users.

Though older than the ReadyNAS NVX, there is still plenty to like about Netgear's ReadyNAS Pro Business Edition network-attached storage (NAS) device. It has a potential storage capacity of 12TB and Netgear even bundles hard drives with some configurations (though expect to pay a premium). There are plenty of backup options to ensure your data is safe, and it performed well during our tests.

The ReadyNAS Pro Business Edition's hot-swappable drive bays are hidden behind a large magnetic door, though neither the door or the drives themselves are lockable. Above the drive door, a blue OLED display provides basic information including available drives, IP address and health status. There is no control panel to configure the NAS directly (unlike the QNAP TS-639).

The NAS device sports two Gigabit Ethernet ports that provide failover support if one port fails and load balancing over a single IP address. There are also three USB ports — two at the back and one up front — that can be used for UPS devices, printers and external hard drives with NTFS, FAT32, ext2 or ext3 file systems. HFS+ external hard drives aren't supported.

We tested the RNDP6310 configuration, which comes bundled with three 1TB Seagate Barracuda ES.2 hard drives, giving you three empty drive bays to insert your own storage. Netgear also offers 1.5TB, 6TB and 12TB configurations, as well as a "Pioneer Edition," which doesn't include any hard drives. The diskless configuration is by far the best value, but because it's targeted primarily towards home and small businesses it lacks Business Edition features like iSCSI, Active Directory support, snapshot backups and load balancing.

Out of the box, the ReadyNAS Pro Business Edition NAS device is set up to use Netgear's X-RAID2 system, which automatically expands capacity and levels data across the array whenever a new hard drive is added. X-RAID2 reserves one drive for redundancy, however, which can have a slight impact on performance. If you'd prefer to stick to the tried-and-true standard RAID methods, the NAS device provides a "Flex-RAID mode" that lets you choose from levels 0, 1 and 5.

There are an impressive number of backup options that can be scheduled or initiated from the one-touch backup button. The NAS device can copy from internal storage, external hard drives, local and remote shares as well as FTP, Web, NFS and rsync servers to internal storage or USB drives. You can even initiate incremental backups from PCs and NAS devices over the local network; a definite boon for backing up your entire workgroup's data overnight. 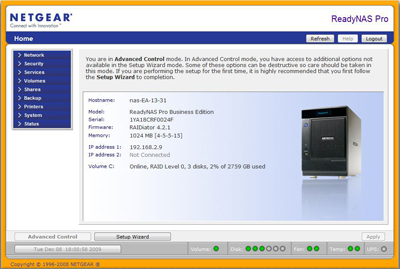 The Web-based interface can be a little tricky to navigate, but it is certainly functional. Along with backup and protocol configuration, you can import users, dictate usage quotas and even install third-party add-ons similar to QNAP's QPKGs and Synology's packages.

The ReadyNAS Pro Business Edition boasts a 1.8GHz Intel dual-core CPU and 1GB of DDR2 memory; a generous configuration for a NAS device. However, this NAS device isn't as energy-efficient as other ones we've tested: our review unit consumed between 66 Watts and 84W of electricity.

We tested the NAS device in both X-RAID2 and RAID 0 configurations using Intel's NAS Performance Toolkit, which performs simultaneous tasks and streams high-definition 720p video from the NAS. We also conducted two file transfer tests between the Netgear ReadyNAS Pro Business Edition and a PC equipped with a 300GB Western Digital Velociraptor hard drive over a Gigabit network. The first file transfer test comprised 3GB of 1MB files while a second involved a 20GB batch of 3-4GB files.

Netgear's redundancy X-RAID2 array has a noticeable impact on the ReadyNAS Pro's performance when writing data or perfoming simultaneous tasks, thought this is understandable given that the NAS device must write data to two locations. However, the NAS device is still faster than the newer ReadyNAS NVX, and in RAID 0 mode is one of the fastest NAS device we have tested, even with performance optimisation for the SMB/CIFS network protocol disabled.

There's no denying that the ReadyNAS Pro Business Edition offers a lot of features, but Netgear charges a premium for this. If you can afford to do without iSCSI and load balancing, we would recommend opting for the diskless Pioneer Edition, but for enterprise workgroups and medium businesses, the Business Edition packs in plenty of functionality.