The Netgear Stora (MS2110) is a simple and sleek NAS device for the home that offers an easy to use Web-based interface and remote access for media files. The initial price tag is certainly appealing, but there is an annual fee for remote access.

The Stora MS2110 is Netgear's simplest network-attached storage (NAS) device yet. Designed for use in the home, it boasts a similar automatic RAID configuration system to Netgear's ReadyNAS devices, as well as remote access for media files. It's relatively cheap, too, though it isn't as expandable or fast as other media-focussed NAS devices, and the options available to administrators are somewhat limited.

The Netgear Stora MS2110 doesn't look like a NAS; there are no exposed drive bays, loud fans or clunky metal enclosures for a start. Instead, the Stora is a sleek, small black box that would fit in with any modern home theatre system. The enclosure is passively cooled, and the plastic front fascia is easily removed to reveal two drive bays.

Out of the box the Stora comes with a single 1TB had drive. Add a second SATA II drive and the Stora will automatically configure a RAID 1 array that mirrors all data written to it. It's a simple and efficient process, but it also means you'll be stuck with 1TB of usable disk space.

The NAS device has one Ethernet port and a single USB port (which you can connect a printer to or use to back up data on the NAS to external hard drives). 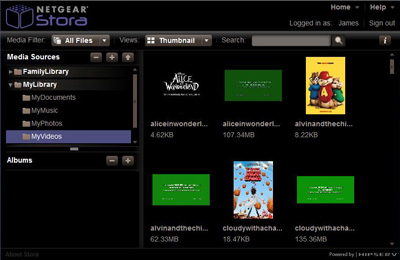 The Netgear Stora's Flash-based interface lets you manage media as files and in virtual albums.

Instead using the clean user interface employed on its ReadyNAS devices, Netgear has designed a Flash-based UI to control the Stora. Administration options are very basic; you can't set user permissions or quotas, or even enable or disable the NAS device's iTunes and DLNA services. Nevertheless, its media browsing capabilities are quite powerful, allowing you to share and play most media files directly through the browser (MKV video files didn't work during testing). Media can be viewed per folder or as virtual albums, which make managing large collections a little easier. You can even choose which folders or albums to stream to DLNA-compliant devices. Unfortunately, if you have a large collection of files the Flash interface is likely to slow down.

By default the Netgear Stora will allow you to configure three users for local access. To configure an unlimited number of user accounts, and get remote access to the NAS device, you'll have to pay US$19.99 for a 12-month subscription to the Stora Premium service. The premium service also allows you to publish photos to your Flickr account and access a secure FTP service. You get a 30-day free trial of this premium service when you purchase the Stora.

Like Linksys by Cisco's Media Hubs, you can remotely access the Stora NAS device through a central Web site, as long as you have a Premium account. Logging in to MyStora.com gives you access to the standard Flash-based interface, with all of the same options as when you access it over the local network. You can also extend remote access to other people by sharing selected files or albums publicly or with password protection. You can set time limits for the availability of individual files and decide whether they can be downloaded. You can't selectively revoke an individual guest's access to files once you have emailed them a link, so you'll have to just change the password for a particular file or virtual album.

Even the iPhone can access files through MyStora.com, despite the smartphone's lack of Flash support.

Netgear bundles its own backup software for both Windows and MacOS X, though the Stora is also compatible with Windows Backup and Apple's Time Machine software. The other bundled software, StoraAgent, provides access to the Web interface and automatically maps the NAS device's default network drives on Windows computers. Unfortunately, these mappings are temporary and will disappear if you lose a network connection or restart your computer.

The Netgear Stora was tested with only the bundled 1TB hard drive installed.

While Netgear doesn't disclose the Stora's processor, we know the NAS device has 256MB of flash memory, which suits basic file transfers and media streaming rather than serving multiple users simultaneously.

The relatively low-power components make the Stora one of the most energy-efficient NAS devices we've seen. Even when conducting heavy read and write tasks, the Stora consumed a maximum of 11.3 Watts.

In most of our tests, the Stora performed slower than the vast majority of two-bay NAS devices on the market — but it is one of the cheapest. For basic media storage and remote access, the Stora NAS device is a decent choice, provided you're willing to fork out the annual fee for the premium account.