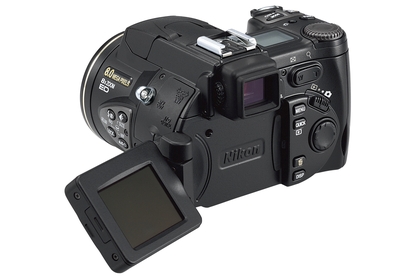 The 8700 is a great enthusiast's camera, delivering excellent, detailed images and a long zoom lens in a light, compact package

Nikon's 8Mp Coolpix 8700 combines high resolutions, long lenses and stacks of features. It is capable of delivering the same 3264x2448-pixel images as its 8Mp peers - around 25 per cent more than a 5Mp camera offers, and enough detail to make good-looking A3 colour inkjet prints. Images are saved to CompactFlash cards, though you'll have to supply your own. However, IBM's Microdrive is also supported. Photos can be stored in TIFF, RAW or JPEG formats and, of the three JPEG levels available, photos at the highest quality measure around 2.8MB each.

Despite its compact dimensions, the 8700 houses a long 8X optical zoom lens with a 35mm equivalent range of 35-280mm and an average focal ratio of f2.8:f4.2. This makes it narrower than the 28mm settings of its rivals, but the 8700 makes up for it by being at least 40 per cent longer at the telephoto end. During power-up the lens extends 3cm in as many seconds - and, thankfully, it takes the cap along for the ride if you don't remove it first.

Both the zoom and manual focus are motorised. Close-up performance is especially good, with virtually distortion-free coverage of just 30mm across the frame.

Unlike its 8Mp rivals from Canon, Sony and Olympus, Nikon has essentially reused the body and optics from an earlier model - the 5Mp Coolpix 5700. And the 8700 inherits many excellent qualities: a surprisingly light, compact body considering its long lens, a 1.8in flip-out-and-twist LCD display, electronic viewfinder, backlit status display, pop-up flash, and fully functional hotshoe. On the down side, you are still limited to a USB 1.1 connection.

The electronics enjoy some enhancements from the Coolpix 5400, including the time-lapse and interval modes, 12-scene presets, live histogram, five-shot buffer at 2.5fps, and optional display gridlines. Most impressive is the upgraded movie mode which offers VGA video at 30fps, albeit only in 35-second clips.

There are Auto, Program, Manual, Shutter and Aperture Priority modes, with exposures ranging from 1/4,000 to eight seconds, plus a bulb option of up to 10 minutes. Sensitivity runs from 50 to 400 ISO.

In use, the 8700 inevitably feels similar to its predecessor, the 5700, and handles well. Optically, the 8700 resolves an acceptable level of detail, although there's a little purple fringing around high-contrast areas such as trees or rooftops against an overcast sky. Images are fairly smooth although, as with all cameras using this 8Mp chip, electronic noise becomes a serious problem above 200 ISO.

One of the Coolpix 8700's neatest features is its time-lapse movie mode, first seen on the Coolpix 5400. Images can be taken at intervals between 30 seconds and 60 minutes, then automatically assembled into a 640x480-pixel movie clip at 30fps. The sequence starts and ends when you press the shutter button up to a maximum of 1050 frames, which translates into a 35-second video.

The 8700 is a great enthusiast's camera, delivering excellent, detailed images and a long zoom lens in a light, compact package. As always, though, personal preferences will sway you towards certain features. For example, its rivals all sport wider lenses, although none gets as close when fully zoomed-in.