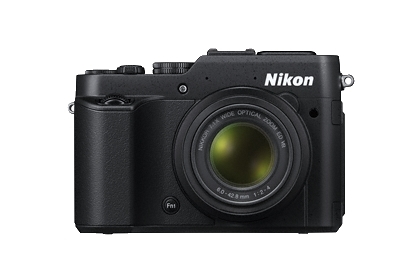 Nikon's Coolpix P7800 is a good all-rounder. The lens can be used for macros and also for zoomed shots up to 200mm, and the end results are very good. Furthermore, it does a good job in auto mode, but it also has extensive manual controls.

Nikon’s Coolpix P7800 is a good choice for those of you who want a camera that can do it all, but are loath to get a digital SLR or an interchangeable lens camera. It’s a compact 12-megapixel camera that packs a big zoom, and you can tweak settings easily, rather than just use it auto mode all the time (though it does a fine job in auto, too).

Physically, the Coolpix P7800 offers pretty much all you need in a camera. In addition to all the dials for changing settings, it also comes with a built-in electronic viewfinder (EVF) and a built-in flash. The dials that are included are as follows: one is for your index finger so you can change the aperture, one is for your thumb so you can change the shutter speed, and there is also an exposure compensation dial at the top that can be used to change the atmosphere of photos in auto mode. It’s a camera that’s reminiscent of Canon’s PowerShot G-series models in terms of the way it looks and how it functions, but it has a different feel due to the way things are laid out, and because it comes with a beefier lens.

The lens is a versatile one. It has a maximum aperture of f/2.0 when the lens is zoomed out completely, and it goes down to f/4.0 when you zoom in all the way. The optical zoom is 7.1x, and with the widest angle of the lens being 28mm, that means it can give you a reach of 200mm. Images are stabilised according to lens shift, which is appropriate considering how hard it can be to keep the camera steady at 200mm, unless you’re using a tripod, and it seemed to do the job quite well in our tests. We had no problems at all framing images while using the maximum optical zoom, and we ended up using it a lot. On the opposite end of the scale, the lens can be used for macro shots as close as a couple of centimetres away from the subject.

You can frame photos by using either the built-in EVF, or the 3in, 921k dot LCD screen (it’s a hinged screen, so you can use it for high- and low-angled shots). If you’re shooting in manual mode, you’ll find that the live view offered by the EVF and the LCD isn’t completely WYSIWYG (what you see is what you get). The EVF and LCD screen didn’t reflect any of the exposure changes that we made in real time. The EVF and LCD screen always show a perfectly exposed live view, regardless of the exposure settings that you set, which can be frustrating. You can use the light meter at the bottom of the on-screen display to get a perfect exposure, or you can just take a photo after each manual adjustment to check if you’ve achieved your desired result. We should point out that the EVF looked quite pale during our tests.

Unlike many other recent cameras, the Coolpix P7800 doesn’t have a touchscreen. This means that you can’t just point at the screen to select a focus point, nor tap on the screen to actually take a photo. If you want to change focus points, you have to press the ‘+’ menu button on the rear of the camera and select manual from the list of options. You can then pick the spot on the screen that you want to focus on. We didn’t have a problem with the focusing performance; the camera focused quickly and on our intended spot almost all the time. In auto mode, it only had trouble focusing when our target was small and there wasn't enough contrast to make it stick out clearly.

We had to use the EVF for the majority of our testing when out and about on a bright day in Sydney, mainly because it was hard to see the LCD screen. As mentioned, the colours and clarity of the EVF weren’t good enough to allow us to make fine changes to the exposure and focus point clearly. That said, it’s still an adequate EVF that shows you the whole scene within the frame. You have to switch between the EVF and the LCD screen manually since there is no auto sensor for this task, and this can be done by pressing the button next to the EVF.

In general, the ease of use of this camera is high. The buttons and controls are all logically laid out, and the menu system is neat. There is a quick settings button above the LCD screen that can be used to quickly change the ISO speed, white balance, image size, and colour mode, among other things, and there are also two function buttons that can be customised. Unfortunately, only the first function button (Fn1) can be customised to be of real use (to change ISO speed, for example), while the second function button, which is in a much more convenient location, is restricted to bring up displays such as the virtual horizon.

You don’t get Wi-Fi with this camera, which means you can’t transfer images from the camera to your phone and upload them to the Internet as you go. If you want that sort of functionality, you can use an Eye-Fi SD card instead (there is also an optional WU-1a Mobile Wireless Adapter that can be purchased).

As for image quality, the Coolpix P7800 is very good. It’s capable of capturing very clear photos, even at maximum zoom, and its colours looked natural during our tests. We used it extensively in auto mode for our tests, in difficult bright conditions, and it performed admirably. Highlights weren’t blown out (mostly), and colours weren’t overly washed out. As for low-light performance, things look good up to ISO 800, and grain starts to become noticeable at ISO 1600. That said, the grain is mostly noticeable when viewing photos at their native size, not at a scaled-down Full HD screen resolution, for example.

The sensor size of 12 megapixels is a little on the low side for a modern camera (though it’s on par with cameras such as Canon’s PowerShot G15), and it means you can’t crop your images as much as you can using other cameras with higher pixel counts. However, the fact is that this Coolpix P7800 is capable of capturing some wonderfully clear images, and we think it will serve well as an all-round camera to take travelling, to take to parties, and to just generally mess around with on a daily basis. It does a great job in auto mode, and it also has some cool effects, including a customisable monochrome mode. Importantly, you can take control of all the nitty gritty exposure details thanks to the conveniently placed controls. It’s a camera that we think is worth considering if you want something that’s no-fuss, yet versatile, and capable of supplying high quality shots.