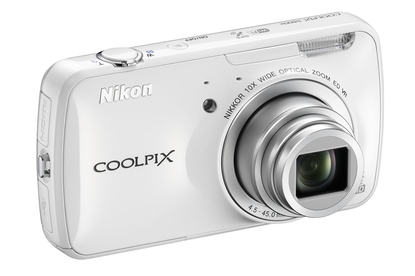 We won't know how Nikon's Coolpix S800c handles until we test it.

Ever wanted a camera that can give you similar functions to a smartphone? If you have, then Nikon's Coolpix S800c might be just what you're after. The Coolpix S800c is a compact camera that runs a Cortex A9 processor, 512MB of memory and the Android operating system (version 2.3.3).

It also has built-in Bluetooth and Wi-Fi — 802.11n with a maximum rate of 25 megabits per second. When you're connected to a network with Internet access (or when you're directly connected to your phone's hotspot), you can upload photos directly from the camera to Facebook or anywhere else you fancy — just like you can from your phone. Up to WPA2 encryption is available and WPS is also supported.

The camera has a 16-megapixel CMOS sensor and the ability to shoot Full HD video. The lens has a 10x optical zoom and a range of 25-250mm, and there is built-in image stabilisation that's based on lens-shift technology. Its widest aperture setting is f/3.2. You can frame your photos through a 3.5in OLED screen on the rear of the camera, which has an 819000-pixel resolution, and this screen is also a touch panel, which further replicates part of the smartphone experience.

With support for the Google Play market, Android apps can be downloaded onto the camera's built-in storage (of which about 680MB is available for apps). This means that photos can be edited using Instagram and any other compatible apps for sharing your snaps. A built-in GPS module also allows the location of your photos to be recorded and shared easily. Google Maps integration works with Nikon's myPicturetown app so that videos and photos can be mapped to the locations where they were shot.

The Coolpix S800c is aimed at users who want similar functionality to a phone when it comes to applying filters and sharing images online, but who also want a higher quality sensor and a more versatile lens than their phone can provide. It very much looks like a novelty product, with a short shot limit of 140 photos per charge of the battery (as per the stated specs). That said, it also has the potential to be a fun product to use, particularly while snapping at parties or functions where a smartphone camera can struggle with lighting.

Pricing for Australia is yet to be finalised.

•If you want more manual features and even better image quality in a compact camera, check out the Sony RX100.

•If you're looking for a new digital SLR, the Canon EOS 650D is an entry-level model that's also very fast.

•If you want a funky-looking interchangeable lens camera, it doesn't get much funkier than the Pentax K-01.

•Panasonic's Lumix DMC-TZ25 and DMC-TZ30 are both good choices if you're after a small camera with a big lens and great image quality.