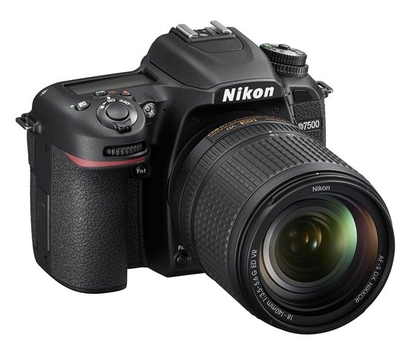 Better than some full frames in this price bracket. More than fills the gap between the D7200 and the D500 in Nikon’s APS-C range.

The Nikon D7500 DSLR is a APS-C (DX) DSLR camera with some of the pizazz of a higher priced full frame. The successor to the D7200 takes what was a very good camera and adds some of the vim and verve of the more costly Nikon topline APS-C D500 - in particular, its 20.9 megapixel sensor - while maintaining a very competitive price and user friendly operating system.

This is a camera that will suit enthusiast and serious amateur photographers. The image quality is as impressive as the camera is smart but let’s begin with what’s new.

The 21 megapixel sensor (down from 24MP in the D7200) is joined in the D7500 by the D500 light meter and EXPEED 5 processor - nice.  Externally, the most obvious change is the addition of a 3.2” tilting (flip) screen. Do you need one? Well, the jury is probably still out. It certainly is a bonus for street photographers - it’s a whole lot easier to take candid shots when it isn’t so obvious that you are lining one up.

That said, some smaller-than-a-DSLR cameras are generally rated higher for street shooting (weight and unobtrusiveness being the key factors, although neither have ever bothered me). Then there’s the obvious flexibility of being able to shoot above your head or closer to the ground much more easily.

The speed is nice and puts the D7500 comfortably in a place where, with the right lens, it will handle sports photography; remember the D500 - which is blazingly fast and a top sports camera - offers only 2fps more at 10fps. The Multi-CAM 3500FX II 51-point autofocus system is better than that of some full-frame cameras in this price range while the 180K-pixel RGB sensor offers more powerful face detection to improve the accuracy of capture-enhancing features such as matrix metering, i-TTL, 3D-tracking, AWB and more.

The 7500D also has eight picture controls and a bundle of special effect modes. And there’s more! 4K UHD video - that’s a winner and a must in a world where if you don’t offer 4K it can mean the difference between sales success and failure.  Bluetooth has been added and NFC taken out. The new model is also a little lighter (thumbs up!).

Oddly, the D7500 only has a single SD card slot where its predecessor had two. However that won’t hamper most users.

How does it hold up?

What that means is you can’t zoom out far enough to get the full effect. That said, I had a lot of fun with it so if you have both a Nikkon full-frame and a DX camera don’t be afraid to pop it on the DX. There are three shots here that show how good a photo it can take on the D7500. Getting dogs in focus and freeze framed isn’t easy but the 8-15mm coped well and the backyard house shots it took were ideal for a little tinkering with filters. It’s fun - like all fisheyes - and offers Nano Crystal Coat, a new anti reflection coating. On a full-frame this lens would be fabulous.