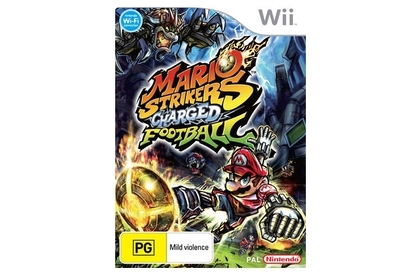 At the end of the day, Mario Strikers Charged is a phenomenal addition to the Wii's library and will rival GoldenEye 64 in terms of the exhilarating multiplayer experiences that it offers up. Don't turn your nose up at it just because you don't like soccer or you'll be missing out on one of the best gaming experiences around. Now, bring on Super Smash Bros. Brawl!

Ah, soccer. It truly is the king of sports. Sure, it's underappreciated in the States but worldwide, you can't find a sport that rivals it in terms of its popularity or the effect that it can have on its rabid fan base. Strikers Charged won't change your mind about soccer, as it isn't a realistic sim of the game by any stretch of the imagination, so if you weren't a fan of the sport going in, you probably won't be one coming out. What Strikers Charged will do, however, is convince you that soccer can be fun if it's played by a bunch of characters from the Mario universe on insane courses with outrageous power moves.

Each game in Strikers Charged features two five-player teams going at it on a field that's roughly the size of a hockey rink. No kicking the ball three miles down the field here. Each team has a captain, three sidekicks, and a goalie (which cannot be selected and is always the crocodile-like Kritter from Donkey Kong Country). Captains are predominately major characters from the Mario universe, such as Mario, Luigi, Peach, and Donkey Kong, each with their own special offensive abilities. For example, Mario grows to five-hundred times his normal size and rampages around the pitch while Wario sprays a foul fart mist and disorients players of the opposing team by mixing up their controls.

Selecting your players requires some thought as every character in Mario Strikers Charged has their own unique attributes, fake outs, and special moves. When a player charges a shot on goal with a captain, they perform a Mega Strike, which launches your character into the sky in an over-the-top Dragon Ball Z-like sequence; depending on how successful you were at getting the kick off, the ball will multiply and fly at the goal at blazing speeds. The opposing player must then stop each strike or risk giving up multiple goals.

While the Mega Strikes are difficult to pull off, a good player will be able to take advantage often, which can lead to some balancing issues. Still, the game allows you to quickly make up ground, so you never feel as if you're stuck in a lopsided game with no hope of redemption.

Thankfully, the controls work with you, not against you. They're not overly complicated but they do take some time to get accustomed. This is especially true because there are quite a few different moves you will perform during a soccer match other than just passing and kicking. The Nunchuk is used to move around on the field, and use Power-Ups like banana peels and the Chain Chomp, which is a canine-like monster that chases and chews up players on the other team.

The Wii Remote is used for just about everything else you can do in the game, such as passing, shooting, body checking, slide tackling, and blocking incoming balls as the goalie. If you need some practice with the controls, the Strikers 101 mode includes 10 lessons that will guide you through the basics such as using Power-Ups and carrying out Mega Strikes.

A Mammoth Load of Modes

The core game-play in Mario Strikers Charged is arguably the best available on the Nintendo Wii, and while the game succeeds most as a multiplayer experience--we defy you to invite three friends over and not have a good time with this game--it is still a total blast if you're playing by yourself because there are number of modes to keep you thoroughly entertained and challenged, such as Domination Mode. This is the standard mode in the game, but while playing alone you can set the computer's skill level from 1 (Rookie) to 9 (Mega Striker).

Another addicting solo game-play mode that will keep you busy after you've grown tired of the main game modes is the Striker Challenges. After completing one of the twelve Challenges--which range from having to win a match while players are missing from your team, to having to gain a shutout--you unlock "Cheats" which can be toggled on and off from the Domination Mode menu. Cheats vary from Environmental Cheats like one which makes electric fences more devastatingly powerful, and Power-Up Cheats like one that makes you play without any Power-Ups.

There is also a Road to the Striker Cup, which acts as the season mode in Mario Strikers Charged, where you can compete in three separate tournaments, the Fire Cup, the Crystal Cup, and the Striker Cup. Each match is progressively harder than the last and by the time you reach the Striker Cup, matches become so gruelling, you'll most likely have to take breaks to prevent hand paralysis.

By successfully winning the Cups, you unlock secret playable characters--the coolest of these being Petey, the fireball spewing Venus Fly Trap that has been appearing in Mario games since the original Super Mario Bros. You can also earn trophies for exceptional offensive and defensive feats, which can be viewed from the Hall of Fame menu.

Mario Strikers Charged also happens to be one of the very first games on the Wii that you can take online via Wi-Fi connection. Unfortunately, we didn't have a chance to take the service out for a spin at press time as we were dealing with an advanced review copy but we can only imagine how much fun to hop online and battle it out with random strangers. We'll have to reserve judgment to see how Nintendo's version of online multiplayer pans out, but again, Strikers Charged is the kind of game that screams for multiple human players to be involved, so the multiplayer portion would have to be outright broken for it to not be a positive addition.