Metroid: Other M on Nintendo Wii is a solid, action-packed shooter! 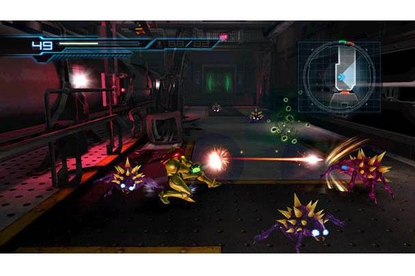 A short yet memorable chapter in Samus Aran's biography, Other M does an admirable job of blending elements of her past 2D adventures with those of her more recent 3D titles. It does misfire in several key areas, but it's still a worthwhile addition to the Metroid canon. Even more interestingly, it showcases the human side of the previously silent bounty hunter, and although her backstory is full of holes and incongruities, it's still an interesting glimpse at the woman who lays hidden beneath the armour.

Note: According to the official Nintendo Press Site, some of the screenshots of Metroid: Other M included in this review may be rendered at a higher resolution than the actual in-game graphics.

If you are intending to play Metroid: Other M, do not make the mistake of expecting it to recapture the 2D glory days of the original Metroid and, the title that I consider to be the series' high point, Super Metroid. You will walk away disappointed because Other M doesn't hew to the classic formula as closely as you might want. But go in with an open mind and you'll be rewarded with a worthwhile action experience that smoothly incorporates the 2D platforming of the previously mentioned classics with the 3D, first-person shooter elements featured in the Prime series. Team Ninja and Nintendo's internal design team, Project M, did a great job of giving Other M its own sense of personality and it results is an action oriented title that helps, rather than hurts, the franchise's mostly sterling reputation.

Despite some missteps, the gameplay is solid, with enough of the familiar Metroid tropes to satisfy even a diehard franchise fan like yours truly. Samus is a deadly predator in Other M, and moves swiftly around like a space ninja; the enemies are far more challenging as well, and you'll spend most of your time battling foes that put the new dodge mechanic -- which requires good timing -- to full use. I was initially worried about the way the devs would handle the dual-viewpoint scheme, but it works seamlessly. Holding the Wii Remote sideways lets you control Samus in a 2D view (it features a fixed camera and 3D environments) while pointing the Wii Remote at the screen switches you to a 1st-person viewpoint for scanning points of interest and firing off missiles. I did hate the fact that you can't blindfire missiles -- frustratingly enough, you have to achieve a hard lock in the first-person view -- but the transition between the two viewpoints is smooth enough that it isn't the hassle it could have been.

What is a hassle, however, is the reliance on the Wii Remote's tiny D-pad, which made my right thumb sore after a few hours of play. And despite my earlier suggestion that you judge Other M on its own relative merits, I will admit that it's hard to overlook some of the ways it deviates from the established franchise formula. First, the game doesn't encourage exploration nearly as much as past titles; you're constrained to a single ship, and although it features a variety of interesting and well designed areas, it doesn't quite have the epic sense of scale that we're used to; there aren't as many hidden objects to find either, with missile tanks, energy tanks, and upgrades that shorten the time it takes to charge your weapon forming the bulk of the loot you find. The game's environments also contribute to some frustrating puzzles that require tedious guesswork and obsessive pixel hunting to solve.

The main campaign is also relatively short -- I finished the core campaign in about nine hours with a surprisingly low completion percentage; the ship is opened up again for you to fully explore, but I haven't done so yet, mostly because it felt like it was only being done for the benefit of completionists. There is a hint at an unresolved story thread that no doubt ties into the start of the next title in the series' chronology, Metroid Fusion -- a GBA title that's notable for also featuring a heavy dose of Samus' internal monologue -- so I'll probably go back and finish it just to make sure I didn't miss any plot developments, but I can't help wonder why it was presented as a glorified bonus level instead of being incorporated into the main campaign.

The game's story -- which I'll talk about in depth later on -- also strays away from the item and ability collection scheme that Metroid helped popularise. You've played enough of these games to know the deal: you either start out powerless or all of your powers are stripped away and you spend the majority of your time powering up so you can go beat down whatever is serving as the bad guy du jour. For instance, The Legend of Zelda starts you off with some basic gear that you enhance over the course of the game, and Symphony of the Night has Death steal all your items, forcing you to hunt them down again. In Other M, Samus starts out with all of her abilities and she never loses them; instead, she chooses not to use her arsenal out of deference to a character that she has history with.

It's a ridiculous twist that makes absolutely no sense, and my incredulity hit its peak when I was forced to navigate large swaths of a lava environment without the benefit of the Varia suit, which blocks heat damage. It wasn't until I hit a certain narrative trigger point that I was told I could activate it, but I had it on me the entire time. The same holds true for every ability at your disposal, and it's hard not to be frustrated when you realise that the only thing stopping you from blowing open a reinforced hatch with a super missile is Samus' misguided sense of loyalty.

But while the narrative negatively affects the gameplay in this regard, it's also the most fascinating aspect of the game: if the action is the game's meat, the story is the not always pleasant, but strangely satisfying sauce drizzled on top. When I first saw the trailer for Other M, my excitement at the prospect of another Metroid game was quickly replaced by skepticism. The main reason was that Samus Aran was not only portrayed without her armor but she had been given an actual voice; this might smack of the kind of fanboy paranoia that makes online message boards such unappetising places to visit, but consider Samus' history for a second. The strong but silent bounty hunter had always kept her cards close to her chest, forcing us to love and adore her not for who she was but what she could do.

So to suddenly see her walking around naked -- metaphorically speaking, of course -- was jarring to say the least. There's an old saying that warns against meeting one's heroes, and I was afraid of what I might see once Samus was stripped of her armor.

Unsurprisingly, I walked away a bit disappointed by the flesh and blood version of Samus Aran. I mostly blame the story, which is heavy-handed and clumsily told. Samus is portrayed as a troubled woman who's toting around a lot of emotional baggage -- the cool kids would describe her as being "totally emo" -- and it really blasts a missile sized hole in the "speak softly and carry a big stick" reputation she's cultivated over the franchise's storied history. The parts where Samus pontificates about her past are the parts I found the least interesting, and it doesn't help that the action is interrupted every so often by a long, drawn out cinematics that you can't skip through (I will say, though, that the cinematic that links back to the end of Super Metroid is awesome.)

What's surprising, though, is that once I completed the game's core story arc, I found myself appreciating the effort to humanise Samus more than I thought I would. Even though I didn't enjoy the story or the cut of Samus' jib, it helped contextualise her entire existence. She stopped being this badass who cruises around looking for bad guys to catch and became an actual human being who's using the vastness of space to try and put some distance between herself and the past. It even had the unintended effect of making me appreciate the Prime series more: the word I always used to describe Retro's FPS trilogy was "sterile" but Other M made realise that the confines of a heavy suit of power armor should feel like a stifling vacuum, and to know that Samus chooses to spend most of her waking hours that way says a lot about who she truly is.

I hesitate to give the developers too much of the credit, however; I feel like I'm doing a lot of the heavy lifting by taking the meager crumbs of narrative and emotion they fed me and imagining it into a cake. But even though I was ultimately disappointed by the story, I understood why they made the decisions they did. I also decided to forgive actress Jessica Martin for her wooden performance as Samus. I initially hated her lifeless monotone, but the more I thought about it, the more it made sense that someone as emotionally scarred as Samus would speak with the haunted stoniness of a trauma victim.

I realize that I've dug further into the game than most people will think necessary, but it's important to highlight what Other M is doing here. It's not just an attempt to take an established formula to new places: it's an intimate glimpse into the mind of a character that is almost universally beloved but whose personality has, up to this point, been encased in an impenetrable layer of mystery. Other M slices right through the armour and lays out Samus' soul for us to dissect, and while I didn't always like what I saw, it was both refreshing and educational to be reminded that there's an actual human being underneath all that shiny power armour.

This, along with the solid action the game has to offer, makes Other M a worthy addition to the Metroid canon. While it isn't the "instant classic" we're all clamouring for, it is a solid title that deserves to stand on its own merits; in other words, don't unfairly judge it against your expectations because even though it doesn't live up to the high bar that we've set for the franchise, that doesn't mean it isn't a worthwhile experience in its own right.