Graphically, the games do look a bit dated, but the widescreen presentation is a welcome addition 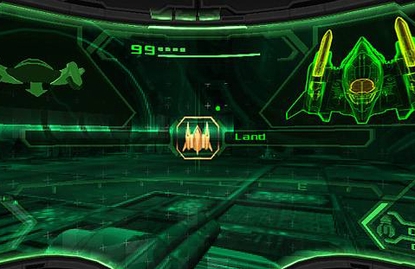 Three of the finest FPS experiences from the GameCube days gets the port they deserves in this stellar recollection of the Metroid Prime series.

The Metroid Prime series has an outstanding reputation, thanks to terrific installments on both the Gamecube and Wii. Taking a series known for its 2-D roots and transporting it into the 3D FPS space was risky but Samus made the transition intact, offering gamers a chance to step into her power armor for some thrilling outer space adventures. Now, Wii owners get a chance to revisit the Prime franchise with updated visuals and motion controls in one outstanding package.

The biggest feature in Trilogy is the addition of motion controls in each game. It's a nice update that breathes new life into the older installments and you can proceed seamlessly from one title to the next without missing a beat. However, those who would like the option to play with Gamecube controllers are out of luck as gamepads are not unsupported. While it makes for a more cohesive package, the removal of gamepad support will no doubt be missed by many but the good news is that the motion controls work well, especially during sequences that feature more vertical movement. Sure, gamepad support would have been nice but I was perfectly happy using the Wii Remote and Nunchuk.

Graphically, the games do look a bit dated, but the widescreen presentation is a welcome addition; unfortunately, due to technical issues, the visor HUD is shown out of aspect. It's a minor complaint, but a valid one for those looking for a flawless re-release. On a more positive note, the set features texture retooling in both Prime and Echoes to display crisper textures, new bloom rendering effects in Prime, and optimized loading times for Corruption.

Corruption's faux-achievement system has also been added to the previous titles albeit with mixed results. While the additional sense of reward was intended to please players, it will disrupt the sense of atmosphere present. The intentions driving the Samus token system make for a more streamlined presentation, but the system's biggest flaw is its lack of explanation as to how you acquire them. Achievements are great but without a clear understanding of how to unlock them, the whole thing becomes pointless.

But despite a handful of missteps, the Metroid Prime Trilogy is quite possibly the best video game deal since The Orange Box and it's certainly the best package deal you can find on the Wii. Not only are the three games an excellent addition to any library, but the set comes complete with gorgeous concept art. Wii gamers who want a solid FPS experience and franchise fanatics should definitely get their hands on this one.