While Pokemon Platinum may not be a completely fresh RPG experience, the rock-paper-scissors gameplay remains every bit as engaging as it's been for the last 10 years. 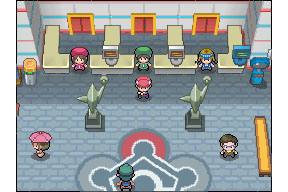 Let's be real: It's Pokemon. That's really all I can say. It's a great game, and if you're a die-hard fan like yours truly, then you probably own it already, and this review won't change your mind. That said, it's still the same great game it's been for the past ten years with a fresh coat of paint and some fantastic new features.

While Pokemon Platinum may not be a completely fresh RPG experience, the rock-paper-scissors gameplay remains every bit as engaging as it's been for the last 10 years. Yes, Pokemon Platinum is the same great game as Diamond & Pearl, with plenty of major changes and minor tweaks for hardcore fans of the series, but even the addictive and inventive gameplay may not be enough for more casual DS players to enter the world of Sinnoh a second time. Still, if you like your Pokemons, get ready for an improvement on near-perfection.

Pokemon Platinum isn't really a sequel, but more like a director's cut. In the same tradition as Pokemon Yellow, Crystal and Emerald, Platinum is essentially the same game as Pokemon Diamond & Pearl, but with version-exclusive additions that range from fresh and innovative to somewhat non-essential. Basically, the more you like Pokemon, the more likely you'll savour and enjoy Platinum's small, but various differences from Diamond & Pearl. Luckily, there's enough new content that I can say Platinum's definitely worth a look, even if you've already filled out a Pokedex in every game up until this one.

Like all the Pokemon games before it, you start Platinum as a budding young trainer who sets out to travel the world with a Pokemon partner. While your main task is to see all the Pokemon in the game and collect tons of powerful monsters, you also must contend with a gang of Pokemon thieves while battling your way into the Sinnoh Pokemon League to become the undisputed champion of all the Pokemon trainers in world. Sound familiar?

For a pseudo-sequel, Platinum boasts an impressive amount of new things to see — more than most Pokemon fans may be expecting from this game. Everything in Platinum, from the environments and music to the animations of battle sprites has been altered, and it should be apparent even to the average player that the world looks and feels different. One of the major changes I've enjoyed in Platinum is that Gym Leaders and Gym Trainers only have Pokemon of their assigned type, while Pokemon trainers' lineups around the Sinnoh region have been switched around, ensuring that I'd be unlikely to run into too many familiar battles.

It's already a relief that the hundreds and hundreds of Pokemon battles in Platinum have some variety to them, but I also didn't expect so many towns and dungeons to get a complete graphical and structural facelift. Game Freak's development team obviously spent a lot of time refining several levels in the game, and they sometimes just outright remodeled the layout of entire stages in the game where they just could have been lazy and copied Diamond & Pearl. With new characters and an altered storyline involving the shadowy Distortion World and version-mascot-Pokemon Giratina on top of everything else, Platinum kept changing things up enough for me that I was playing nonstop for days. Even in places where I expected nothing to change, everything looked completely different: many items weren't where I remembered them, and the various Pokemon I was finding weren't where I thought they'd pop up.

Even with all of the subtle touch-ups, only the most hardcore Pokemon fans are going to appreciate these changes. After all, Platinum is still asking trainers to battle through hours and hours of the game to essentially see just one brand new dungeon. Of course, there are also some additions of the Wi-Fi variety, including new mini-games and an improved Global Trading System, along with the built-in ability to battle your friends online with Nintendo's Wi-Fi network. These additions are mostly just extra bells and whistles, and most players will skip right over things like the Wi-Fi Plaza in favour of playing the actual game — especially new areas like the Battleground Cafe.

Still, compared to its sister titles, Platinum makes the updates in Yellow, Crystal, and Emerald look positively lightweight, which is one of things that justifies picking it up, even if you already own Diamond & Pearl. If you're a Pokemon fan, you're probably already enjoying the game. If you've been holding out on the hype and already own a DS, pick Platinum up and get ready for an unhealthy addiction to the world of Pokemon.