Budget handset that boasts an FM radio and a flashlight. 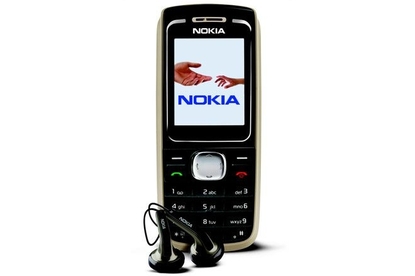 The Vodafone-exclusive Nokia 1650 fills the void if you’re after a cheap as chips phone for basic calls and text. The spongy controls are a drawback, but the included FM radio and flashlight may come in handy.

One of the cheapest Nokia handsets available in the current range, there are no illusions about the aim of this handset — simple talk and text. Offered as one of Vodafone’s prepaid handsets, the 1650 has an FM radio and a flashlight but suffers from poorly designed controls.

The 1650 is a compact and lightweight handset, but feels reasonably well built considering the asking price. A good example of this is the rear battery cover: it’s easy to slide off but holds firmly in place and doesn’t rattle or creak when attached. The 1650 is finished entirely in a matte black plastic, while a gloss black bezel with silver highlights surrounds the display.

The biggest issue with the 1650 is its controls. At first glance, they look acceptable — a soft green backlight accompanies each key to ensure it can be used in dim light, while a simple four-way navigational pad, two selection buttons and answer/end calls keys keeps things tidy and effective. Unfortunately, the buttons have an overly spongy feel, meaning they require a firm press to activate. For messaging, this means a slightly steep leaning curve, and the slight keystroke lag doesn’t help either.

The 1650’s display is small but adequate considering the target market. The screen has a resolution of 128x160 and supports up to 65K colours, though it has poor viewing angles and is difficult to read in direct sunlight. Thankfully, call quality is fairly good, while the hands-free speakerphone also works well and produces reasonable volume.

Features are sparse, but the built-in FM radio is a nice touch considering the price point. Conveniently, holding down the asterisk key for two seconds launches the radio application, though you’ll need to use the included headset as this acts as an FM antenna. The included HS-105 headset also doubles as a hands-free device and features a call handling button and shirt clip built into the cord. The radio offers reasonable but not outstanding quality. Auto-tuning is available by holding down the up button on the navigational pad, while up to 10 presets can be saved and then accessed by scrolling through using the left and right directional buttons or pressing a corresponding number on the keypad.

Other features include a range of PIM (Personal Information Management) functions such as a calculator, converter, a basic spreadsheet application, countdown timer, calendar and a stopwatch. Nokia also bundles a ring tone composer, a Chinese lunar calendar, and a flashlight, which is located at the top of the handset and is useful for finding keyholes at night. The ring tone composer creates polyphonic ring tones, but we found both created and default ring tones could have been a little louder. Perhaps the biggest exclusion is Bluetooth — even on the cheapest of handsets, it should be a standard feature.