Nokia 808 PureView preview: The Nokia PureView 808 has a 41-megapixel camera 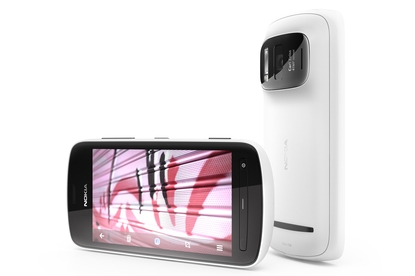 Nokia's 808 PureView is best described as a camera with a phone in it. A 41-megapixel camera to be precise. Though its imaging capabilities certainly sound impressive, the 808 PureView's Symbian software will determine whether or not it becomes a success.

Nokia may be focusing primarily on the Windows Phone platform for its core smartphone range, but it still hasn't completely given up on Symbian. The company's latest Symbian phone is the 808 PureView, best described as a camera with a phone in it. A 41-megapixel camera.

Yes, you read that right. The Nokia 808 PureView comes with a 41-megapixel camera sensor with Carl Zeiss optics and a Xenon flash. Before you wonder why the hell you would ever need that many megapixels on a phone camera, you can't actually capture a true 41-megapixel image. Instead, the 808 PureView uses what's called oversampling to combine up to seven pixels into one "pure" pixel when taking typical sized shots (5-megapixels). According to Nokia, this means it will eliminate the visual noise found on other mobile phone cameras while at the same time allowing you to zoom in up to 3X without losing any detail.

Alternatively, you can capture a 38-megapixel image if you wish by going into the settings and using the 'creative shooting mode'. It's clear that this isn't what the 808 PureView has been designed for though — it may have a 41-megapixel sensor, but the default option is 5-megapixel shots in a 16:9 ratio. According to the Nokia, the imaging technology on the 808 PureView took over five years to develop.

That five year development phase is apparently why Nokia chose to use this technology in a phone that runs its Symbian operating system. The same platform that Nokia's CEO Stephen Elop described as a "burning platform" just a year ago, and the same platform he admitted to be "non-competitive" in leading markets like the US. To be fair, Nokia has stated that its PureView camera technology will eventually make its way to a Windows Phone, but has not specified a time frame as to when this will happen.

While its camera is certainly impressive, the Nokia 808 PureView does not stack up overly well elsewhere. It has a 4in AMOLED display but the resolution is only 640x340, much lower than many of its competitors who are now shipping screens with 1280x720 resolutions. The camera also makes the 808 PureView a rather chunky phone: it measures 17.9mm at its thickest point (13.9mm at its thinnest point) and weighs a hefty 169g.

The Nokia 808 PureView is powered by a single-core 1.3 GHz processor, 512 MB of RAM and has 16GB of internal memory along with a microSD card slot for extra storage. It also includes an NFC (Near Field Communications) chip and is the first Nokia phone to come with the company's "rich recording" feature. This combines a digital microphone with algorithms: Nokia claims this will enable the phone to record distortion-free audio at levels of up to 140 dB. In addition, the 808 PureView includes Dolby headphones in the sales package.

There has been no word yet on whether Nokia will release the 808 PureView in Australia.