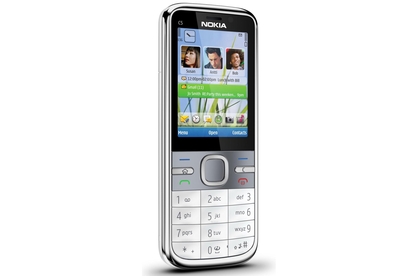 The Nokia C5 won't get you excited, but if you're after a relatively inexpensive smartphone and aren't interested in touchscreens then it may be worth a look.

Representing the start of a new naming convention for Nokia mobile phones, the Nokia C5 is a mid-range smartphone that doesn't stray too far from the norm. This relatively inexpensive mobile phone won't appeal to business users or those who are interested in the latest and greatest touchscreen smartphones, but its updated phonebook, free turn-by-turn navigation and access to Nokia's Ovi application store mean that it offers decent value.

The Nokia C5 seems like a logical replacement for the Nokia 6700 classic, a similarly positioned handset that featured stainless steel casing. The C5 looks less flashy, but its build quality is just as impressive. It's constructed from a combination of sturdy plastic and aluminium highlights, but it doesn't feel too heavy. A slightly loose battery cover on the bottom right corner was our only minor complaint in an otherwise attractive mobile phone.

The Nokia C5 has a reasonably sized 2.2in display, with the only real blight being the difficulty of seeing it in direct sunlight. The C5 also seems more resistant to fingerprints than we're used to, with a quick wipe against a shirt usually enough to keep it free of smudges and marks.

The Nokia C5 is straightforward to use. Controls consist of a five-way navigational pad, two selection buttons and answer and end call keys. The C5 also has tiny dedicated home and clear buttons and external volume controls. The volume controls are stiff to press but the numeric keypad has spacious, slightly raised keys that are comfortable to press, making it one of the best in its class.

The Nokia C5 may be the start of a new naming convention, but under the hood it runs the familiar Symbian S60 operating system, albeit with a few handy additions. One the best of these is a new phonebook that has Facebook integration, allowing you to see your friends' status updates. The Facebook application also comes preloaded on the device, along with the Ovi application store — Nokia's hub for third-party applications — and Ovi Maps 3.0, providing full turn-by-turn navigation free of charge.

The Nokia C5's menu retains the familiar grid style and basic list style submenus, but the home screen can be personalised with a number of shortcuts and notifications. These include a customisable shortcut bar and a bar that displays up to three of your favourite contacts for quick access.

The C5 also has a basic 3.2-megapixel camera with single LED flash. The flash is tiny and struggles to adequately take photos in dim lighting, but this is a common problem for most mobile phone cameras. The inclusion of a standard 3.5mm headphone jack means the Nokia C5 is a capable music player. An FM radio, voice recorder and media player are handy inclusions, as is the included 2GB microSD card for extra storage.

The Nokia C5 is an HSDPA-capable phone but doesn't operate on the 850MHz network band — so it won't work with Telstra's Next G network. Wi-Fi is a notable omission, but Bluetooth and a standard mini-USB connection are included.

The Nokia C5 is available through Telstra in Australia, but is also sold by online mobile phone store MobiCity outright and unlocked.