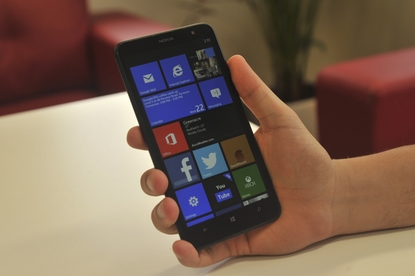 Nokia has identified a gap in the large-screen market and filled it with this fantastic value-for-money offering. The Lumia 1320 stands testament to the maturing Windows Phone ecosystem by delivering it on six glorious inches. It might not be the smartphone for everyone, but the niche looking for a budget ‘phablet’ will appreciate the Nokia Lumia 1320.

The Lumia 1320 is the second phablet from Nokia to reach Australian shores following the premium Nokia Lumia 1520. But whereas the Lumia 1520 prides itself on bringing flagship specifications to the large screen market, the Lumia 1320 aims to take the ‘phablet’ phenomenon mainstream with its seductive $449 price.

A big part of the Lumia 1320’s character is its size. The body stands 164mm tall, is 9.8mm thick and weighs a hefty 220 grams. The 6in, 1280x720 resolution screen is coated in scratch-resistant Gorilla Glass 3. The glass covers Windows’ customary back, home and search button, giving the entire façade a flushed look.

The rest of the Lumia 1320’s buttons can be found on the right side. These include volume up and down, a lock button and a camera key. Holding the camera key will bypass the screen lock and activate the camera within three seconds. With the buttons located on the right hand side, people who handle smartphones with their left hand may find their positioning uncomfortable.

On the back is a single polycarbonate case. The case can be interchanged and its understated design highlights the Lumia 1320’s symmetrical appeal. Popping the case open is a cringing affair that requires tact and patience at first, but as the case becomes more limber and you learn the ins-and-outs of the Lumia 1320, it does get easier.

Typing with the Lumia 1320 is best done with two hands. It’s a fantastic device to enter text into — even in portrait mode — but trying to quickly enter text with a single hand thwarts the experience as even long fingers fail to reach the other side of the keyboard.

Stretching a high definition 1280x720 resolution across a 6in screen delivers a healthy 245 pixels-per-inch. Videos and images can still be enjoyed on the large screen, but being able to see the individual pixels does take away some of the appeal.

Fortunately, the Lumia 1320 runs the aesthetically pleasing Windows Phone 8 (WP8). Coupled with Nokia’s fluency in black, sifting through the WP8 interface is thoroughly enjoyable. The transitions are seamless, the layout is intuitive and the animations entertain.

The Lumia 1320 is one of the first Nokia devices to come with the new Lumia Black update. This update addresses some of shortcomings Windows Phone suffered compared to its established Android and iOS rivals. The update improves the lock screen and the task manager; makes it possible to customise tones; provides compatibility with Nokia’s latest imaging applications; and improves the system’s overall stability.

An ideal purchase for fleets of businessmen

Windows Phone devices with screens larger than five inches benefit from a third column on the home screen. This means you can receive more information from more Live Tiles quicker. Keep in mind the Live Tile interface is quite customisable (you can select the Tiles you want to appear, and you can choose from one of three sizes).

The only gripe we have with the operating system is the Settings menu, which is riddled with so many options that it’s easy to get lost. This could be improved by simply grouping together relevant settings rather than littering the screen with them.

For some time, Windows Phone has been playing catch up with its established iOS and Android rivals. Now it has a reported 200,000 applications and one distinguished ace up its sleeve. The Lumia 1320 comes with Microsoft Office preinstalled, granting users access to Word, Excel, PowerPoint and SkyDrive from the easy-to-use interface. With six inches worth of screen real-estate, using Office on the Lumia 1320 is surprisingly practical. Furthermore, the Lumia 1320’s recommended retail price of $449 makes it an ideal purchase for business fleets or budding university students.

Rival smartphones include the $599 Samsung Galaxy Note II, which although it's more than a year old, does possess a generally stronger feature-set.

The Windows Phone application market is approaching a level of maturity. In our time with the Lumia 1320, we found that most of the applications we regularly use were available in the Windows Store (IMDB, Soudhoune, Twitter, Facebook, YouTube, LinkedIn, TripView, Digitally Imported, and Angry Birds Go, are some examples). As more apps become available, moving from a Google or Apple ecosystem to a Windows ecosystem will become easier. However, we still recommend making sure the apps you use frequently are available in the Windows Store before you invest in a Windows Phone device.

Powering the Lumia 1320 are humble innards. It is equipped with a 1.7GHz dual-core CPU, 1GB of RAM and 8GB of internal storage. A microSD card slot allows the storage to be expanded by up to 64GB, and the Lumia 1320 will come with 7GB of free SkyDrive cloud storage. These specs might not be cutting edge, but together with the efficient software, they manage to deliver an overall user experience that was zippy.

The Lumia 1320 features a strong connectivity suite that includes 4G LTE, Wi-Fi a/b/c/g/n and Bluetooth 4.0. The absence of NFC is a concession likely made to keep its price down, while the wireless standard Miracast could not be included due to the limitations of Windows Phone.

Battery life on the Lumia 1320 is impressive. The 6in smartphone features an in-built 3400 mAh (milliamp-hour) battery capable of delivering one to two days of usage. Using the smartphone to make calls, browse the Web, watch videos, check emails and take photos, we consistently experienced close to two days of usage without charge. The outstanding battery life is partly owed to the combination of a large battery with a less-intensive low-resolution screen.

The Lumia 1320 has a modest 5MP rear camera that is capable of recording 1080p videos at 30 frames per second, along with a front-facing VGA camera. Photos are characterised by more noise than is preferable, but this is more than justified by the competitive $449 price. To put things in perspective, the premium Nokia Lumia 1520, which has a 20MP PureView camera, has a recommended retail price of $899; double that of the Lumia 1320.

The photos you do capture will be elegantly displayed in Nokia’s Storyteller application. This Beta application, which is an additional download, groups photos into events based on the date they were taken. If you zoom out from an event, a delightful animation will transition the screen to a map detailing where the photos were taken.

The Storyteller app features one of the most eloquent uses of photo metadata we’ve seen in a smartphone. If you do download it, unfortunately, you will have the Storyteller application in addition to the default Photos gallery. In future, we would like to see the functionality of these two separate applications integrated in some way, because they are very similar except for the level of metadata that is used.

Nokia is beginning to find its stride in its continual development of Windows Phone handsets, and the Lumia 1320 is a good example of this. Its build quality is sublime, and as the Windows OS continues to mature, we think more people might be inclined to migrate across from rivals Android or iOS — especially at this price point.