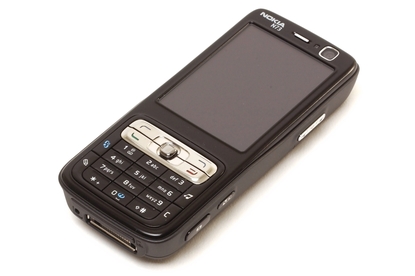 An minor upgrade to the N73, the N73 Music Edition includes a 2GB mini-SD card and a new music interface.

A generous 2GB mini-SD card capable of storing up to 1500 songs and a new music interface are at the core of Nokia's upgrade of the N73, the N73 Music Edition. The handset is the same in all other areas including 3G support, a large and clear display and a 3.2 megapixel camera with a Carl Zeiss Lens combining to make it an attractive, all purpose media device.

The N73 Music Edition is equipped with plenty of connectivity options, but doesn't include Wi-Fi. It still sports Bluetooth, infrared, and USB 2.0 however, and Nokia includes a USB cable in the sales package. There is also an excellent Web browser that has the ability to scroll through each page with a feature called 'page overview'. This view shows a full Web page shrunk to fit the screen and a selection box is used to navigate to the part of the page you want to view in more detail.

Email is also included with SMTP, IMAP4 and POP3 clients supported. Email attachments can be downloaded and saved to the N73 Music Edition's mini-SD card or to the 42MB of internal memory. The mini-SD card slot is cleverly located at the bottom of the handset. There is also regular MMS and SMS messaging with T9 predictive text input, but the poorly designed keyboard will affect messaging speeds.

The N73 Music Edition conveniently includes an adapter to plug in a standard 3.5mm headphone jack, which is handy, because the included pair only does a mediocre job. There is a digital music player with stereo audio supporting MP3, AAC, M4A, eAAC+ and WMA files. The device also includes RealPlayer, so playing full screen videos in MPEG-4 format is possible. Best of all, the N73 Music Edition is a USB mass storage device so files can simply be dragged and dropped onto the phone without using Nokia software. A stereo FM radio with 20 preset stations is also included, with all multimedia functions controlled through a stylish media menu.

Running on the Symbian 9.1 operating system, the N73 Music Edition has a full array of smart phone applications, including Quickoffice Word, PowerPoint and Excel document viewers, a host of PIM features (calendar, contacts, to-do list, notes, recorder, calculator, clock and converter) and both voice recording and dialing. We were slightly disappointed with the speed of the interface as it does struggle switching between applications. Start-up time is also a little slow, taking just over a minute.

The N73 Music Edition's 3.2 megapixel camera features a Carl Zeiss lens, 20x digital zoom, a flash with red-eye reduction and autofocus, so it's one of the best camera phones on the market in terms of features. While the photos it captures still don't compare to a good compact digital camera, they are very good for a camera phone.

Capturing images at up to 2048 x 1536 pixels, the N73 Music Edition's colour reproduction is excellent, but image sharpness is a slight problem. Shots are fairly crisp though with defined edges and excellent levels of detail for a 3.2 megapixel sensor. The also has a solid list of settings including close-up and portrait scene modes, the ability to adjust white balance, colour tone settings, and light sensitivity (ISO). For editing photos and other images, Nokia includes a copy of Adobe Photoshop Starter Edition 3.0 in the N73 Music Edition sales package.

A dedicated camera shutter button and zoom keys are easily accessible when the phone is flipped horizontally, so the camera experience is much like that of a stand alone digital camera. Video recording is also available; up to 1.5 hours of video in MP4 and 3GP formats can be stored. Videos are captured in 352 x 288 resolution at up to 15fps and feature automatic white balance control and up to 8x digital zoom. There is a second, integrated VGA camera on the front with 2x digital zoom. This second camera can be used for both video calling over a 3G network or for taking portrait photos.

One of the most compelling features of the N73 Music Edition is the high quality, 2.4-inch colour display. The screen is capable of 240 x 320 pixels (QVGA) and can display up to 262,144 colours. It has a great viewing angle and is clearly visible in a variety of lighting conditions. The display is ideal for use as a viewfinder with the phone's camera and also stands out for Web browsing. It is capable of displaying all 12 menu items on one screen, so scrolling in the main menu is eliminated. The N73 Music Edition display also features an ambient light detector which is used to optimise display brightness and power consumption. This feature automatically adjusts the screen and keypad backlight depending on the conditions.

Measuring 110mm x 49mm x 19mm, the N73 Music Edition isn't the smallest phone on the market, but it weighs just 116g. The metallic plastic surrounding the keypad and controls gives the unit a touch of class, but the major setback of the N73 Music Edition is its keypad; it is very small and is squashed into the bottom half of the phone. The keys themselves are flat, so typing messages is quite difficult. Above the keypad is a more pleasing five-way joystick, two selection buttons and answer and end call keys. There are also buttons for menu, clear, edit and multimedia that surround the keypad.

According to Nokia the N73 Music Edition is rated at up to 226 minutes of talk time and up to 370 hours of standby time using a 3G network. These figures are very good, and we found they were quite close to the mark - on average we had to charge the unit every three days. Using a 2.5G network with handset, the figures will change to 20 minutes extra talk time, but 20 minutes less of standby time.