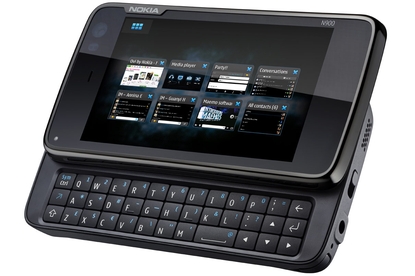 The Nokia N900 is best classified as an interesting but ultimately incomplete device. The Linux-based Maemo 5 OS does some things superbly and others poorly. This smartphone offers one of the best mobile Web experiences available but there is plenty of room for improvement elsewhere. Watch this space.

Running an advanced, Linux-based operating system called Maemo 5, Nokia's N900 is certainly an interesting device. Foremost an Internet tablet and capable of full multitasking, the Nokia N900 smartphone will definitely impress early adopters and gadget gurus, but for others the experience will feel incomplete and uncomfortable.

The Nokia N900 smartphone lacks a little style compared to many of its competitors. The conservative black glossy styling on the front and matte rear do not scream excitement. However, many users will remain undeterred by the plastic finish, which mirrors many of Nokia's previous N-Series devices. The N900's build quality is questionable but doesn't impact too severely on the overall user experience. Though the slider feels solid enough, it's not spring operated and requires a firm press to click into place. The rear battery cover doesn't creak or rattle despite being made entirely of plastic, but the placement of the flip-out stand means the N900 often doesn't sit completely flat when placed on a table or desk.

The Nokia N900 is a chunky smartphone. It's larger than the similar styled N97 and when compared with the likes of the iPhone, resembles a large plastic brick. Thankfully, the touch screen is excellent. Its resistive rather than capacitive (so Nokia also includes a stylus) but we didn't need to use it at all. The screen is responsive and is one of the best resistive screens we've used, though it can be frustrating trying to press icons close to the corner of the screen — it often takes two or three presses to register. In addition, the display isn’t kind to fingerprints, quickly becoming a grubby mess after a few taps.

The Nokia N900 has a full QWERTY keyboard but, with only three rows, it's rather small. The keys themselves are excellent, providing good travel and tactility and feeling firm when pressed. The three-row layout means most keys have either two or three options, available by using the Sym/Ctrl and secondary buttons, located on the left side. There is also an on-screen keyboard available when the slider is closed.

The Linux-based Maemo 5 OS is the star of the show. This really is an advanced smartphone — it's a genuine handheld computer. Maemo can run multiple tasks simultaneously, the Web browser is outstanding and the interface looks smooth and polished, unlike the Symbian operating system usually employed by Nokia. Menu icons and fonts will be familiar to any Nokia users, but Maemo ups the ante with some nice screen transitions; when opening new windows and browsing though running applications, for example.

The main component of Maemo 5 and the N900 is a fully customisable, multi-page home screen, called the desktop menu. Here you can add a full range of shortcuts, widgets and bookmarks to suit your use. There are four home screens available, but you can choose less if you wish. Want Facebook and Twitter shortcuts on the front page? Easy. Want quick access to commonly used functions like phonebook, messaging and camera? Done. The flexibility is virtually endless and it allows each user to customise their device to suit their needs. The ability to effortlessly swipe though running programs is as easy as on a computer — the Nokia 900's multitasking capabilities are fantastic.

We liked the status notification bar situated at the top of the screen. Tapping anywhere in this box brings up a quick menu that allows you to adjust volume, see a battery level indicator, set an alarm, adjust connections (including Wi-Fi and Bluetooth) and change the sound profile. It's not as comprehensive as the drop-down bar in Google's Android OS, but it's far better than what Symbian has to offer.

Unfortunately, the Maemo experience is far from perfect and often left us a little frustrated. The biggest issue is the fact that 99 per cent of the N900's functions only work in landscape mode — only the phone application (using an on-screen dialling pad) rotates to portrait mode. Though most of the functions work quite well in landscape mode, it still feels strange not to be able to use the N900 in the same manner as almost every other phone.

Navigating the menu structure is reasonably straightforward, but moving back on screens is inconsistent — some menus have a back button, others require a tap of the window. Unlike the iPhone, there is no button that will immediately take you back to the home screen, so you're often left pressing three or four times to exit a program. Though this is something you'll quickly get used to, it doesn't feel polished when compared with the alternatives. In particular, we think Android's customisable home screens are just as flexible and more intuitive.

The best part of Maemo 5 is its superb Web browser. Though not offering multitouch capabilities, it handles Flash with no issues and can play streaming videos straight from full mobile sites like YouTube. Scrolling and moving around the page isn't as intuitive as the iPhone, but the flexibility is endless — you can download files and applications straight from the browser and every page we loaded rendered superbly. You can zoom in and our by drawing small circles on the screen; clockwise to zoom in and counter clockwise to zoom out, or simply double tap. We also downloaded a version of Mozilla Firefox and were left extremely impressed. If you spend plenty of time on the mobile Web, you'll feel right at home with the N900.

The Nokia N900 includes Skype and Google Talk clients integrated into the phone application and the messaging interface is excellent. Both chats and SMS conversations are threaded and incoming texts are placed into the running applications menu, in a large, post-it note style pop-up. The Nokia Ovi Store isn't yet compatible with the N900, but this will be implemented in the near future.

The Nokia N900 smartphone has an impressive specification list, headed by HSDPA capabilities, GPS, Wi-Fi, Bluetooth with A2DP and a 5-megapixel camera with Carl Zeiss optics and a dual LED flash. It also includes a hefty 32GB of internal memory in addition to a microSD card slot. A standard 3.5mm headphone jack means you can use your own headphones, but the media applications are a little disappointing — the interface looks better than Symbian but there are no advanced options, like equalisers, a visualiser or any advanced audio settings. A built-in FM transmitter is great for the car, particularly if you don’t have a Bluetooth car kit installed.

Online store MobiCity is currently selling the Nokia N900 with a 12 month warranty.