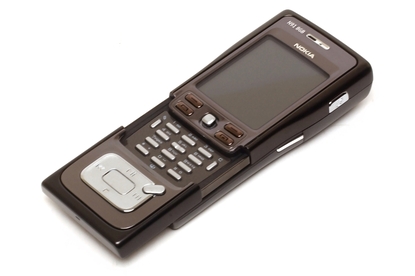 The Nokia N91 8GB is a top notch music phone with a massive 8GB hard drive, but improvements over the previous model are limited. As a mobile phone the N91 8GB does include some good features but is let down by a cramped keypad and slow interface.

With a whopping 8GB of internal storage and a new music player, the aptly named Nokia N91 8GB is the next iteration of the N91 music phone. The phone's music capabilities are top notch, with a 3.5mm headphone jack and external music controls in addition to the massive disk space. The N91 8GB also plays video and has Wi-Fi support. However, as a mobile phone the 3G-capable Nokia is let down by a cramped keypad and slow interface.

The N91 8GB is clearly a music player first and a mobile phone second. Its most pronounced features are the external music controls. At first glance there doesn't appear to be a keypad, but this is hidden behind a small slider that houses previous/next track, play/pause and stop buttons. These controls allow users to skip through music tracks without needing to use the phone's regular interface.

The N91 8GB even includes a handy hold switch on the top to guard against accidental keypad presses. Nokia has also done away with the frustrating proprietary headphone jack, offering a standard 3.5mm jack on the top of the phone. This means any set of regular headphones is suitable. There is also a small remote control with a shirt clip included in the sales package that plugs into the proprietary remote jack. The remote enables you to skip tracks and adjust volume levels during music playback with the phone still in your pocket.

The best feature of the N91 is the 8GB hard drive (upgraded from the previous N91's 4GB). There are plenty of MP3 players on the market that don't have this much storage capacity, so it's great to see so much memory on a mobile phone. The N91 8GB's hard drive is capable of holding up to 6000 music tracks, which is more than enough for many people's needs. Having such a large hard drive on board also means there is no need for an extra memory storage slot.

The new music player supports plenty of file formats including M4A, MP3, AAC, eAAC and WMA. The N91 8GB also includes album art, playlists, preset equaliser settings and searching by ID3 tags as standard functions. Unfortunately, it can't play music purchased from the iTunes store or DRM encrypted WMA files, although Nokia claims the latter will eventually be possible with a software upgrade. We were very impressed with the sound quality and volume levels as well as the interface, which is set out very similarly to the iPod. When combined with a quality set of headphones the N91 8GB really is an excellent music player.

In addition to the MP3 functions, the N91 8GB also includes an FM radio and you can record radio broadcasts straight to the hard drive. We particularly liked the fact that the hard drive can be accessed directly by selecting 'Mass Storage' from the phone after connection to a PC via USB cable, or by navigating through the menu to Connectivity/Data cable. This allows simple drag and drop functionality for both music and video files. Alternately, Nokia's management software works well and can be used to upload data to the phone.

The N91 8GB also includes video playback of 3GPP, H.263 and MPEG-4 files at resolutions up to 208 x 176 and comes pre-installed with RealPlayer and Flash player. Unfortunately the video quality was a little disappointing. Videos were sluggish when starting up and when running through RealPlayer they were slightly blurry and unclear.

The N91 8GB has an easy to use Series 60 interface, but its speed is a real letdown. It takes just over 30 seconds to start-up and is slow when opening and switching between applications. Playing music files also has a detrimental effect on the speed of the interface, with applications taking a couple of seconds longer to load. Unfortunately these problems plagued the previous N91, so its disappointing to find that they haven't been addressed on this model.

The N91 8GB includes a 2 megapixel camera but there is no flash or self-portrait mirror. The quality of photos is decent, but as expected, not good enough to replace a standalone digital camera and the lack of a flash makes it almost impossible to capture images in low light. The N91 8GB camera has a respectable resolution of up to 1600 x 1200 for still images and 352 x 488 for video clips, and these can also be used for MMS messages.

The N91 8GB also includes Lifeblog - a digital photo album tool for mobile phone photographers and bloggers. Lifeblog automatically synchronises the digital media between the phone and a PC so you can view, search, edit, and share images and messages. You can also blog directly from the phone to the Internet and this is as easy as registering for a weblog account using the handset, selecting a message or image to post, adding a title and text and clicking send.

There are plenty of connectivity options including 3G and tri-band GSM support, Bluetooth 1.2 and native 802.11b/g Wi-Fi, but no infrared. There is USB connectivity and best of all this is through a standard mini-USB connection on the left side of the handset. Nokia also includes a standard USB cable in the N91 8GB sales package. A calendar, calculator, converter, stop watch, voice recorder and to-do list round out an impressive list of PIM features. In terms of messaging, the N91 8GB supports standard SMS, MMS and email messaging with T9 predictive text input.

The N91 8GB is one of the largest phones currently available on the market. It measures a whopping 113.1mm x 55.2mm x 22mm and weighs a hefty 165g; heavier than its predecessor, so it really does rest heavily in your pocket. The only advantage of this design is the build quality, which appears to be very solid thanks to the black stainless steel casing.

Unfortunately, the controls and buttons used on the N91 8GB are once again small and difficult to press, so the user experience isn't an overly positive one. The keypad is a disappointment. Because of the slider, the buttons are seated in a small ridge, and both the 123 and the *0# buttons are cramped against the edges of the recess. As the buttons are already very small, this makes accurate key presses even more difficult. We struggled during SMS messaging and found it difficult to maintain a constant speed. The N91 8GB's keypad's best feature is without doubt the soft blue backlight which surrounds each key, making it very easy to find your way in the dark.

The phone also has two selection buttons, a five-way navigational joystick and answer/end call keys. The small and thin nature of these keys means those with large fingers will find the phone difficult to operate and the joystick, while effective, doesn't feel stable when pressed. Also perplexing is the menu button location on the right hand side of the phone - you have to alter your natural hand position to press it. The menu button would have been much better suited to the standard position, in between the two selection buttons.

The N91 8GB's display offers a 176 x 208 pixel resolution and supports up to 262,000 colours, but it isn't as clear or crisp as many other phones in the N Series, such as the N80. It also isn't as large as it could have been, especially when taking into account the amount of unused space surrounding it.

According to Nokia, the N91 8GB's battery will last for three to four hours of talk time and up to six days of standby time. When used just as a music player the battery will last approximately 10 hours. These figures are fairly close to the mark, but if you use both the phone features and music functions the handset will need charging every two days or so. Furthermore, if you regularly watch videos as well, you'll have to charge even more frequently.

The price, chunky design and size and position of the controls might not appeal to everyone, however no other comparable phone has an 8GB hard drive and Wi-Fi connectivity. So while there are flaws and omissions, if you want a phone with loads of space for music, the N91 8GB should be considered.