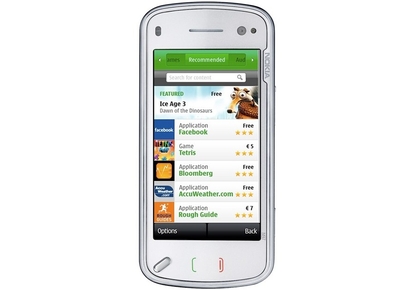 The launch of Nokia's Ovi Store means a dedicated app store is finally available to users of the company's mobile phones. It's clunky and slow at times, the library of apps is small and the method of paying for apps needs some work, but this is just the beginning and it should gradually improve.

Translating to "doorway" in Finish, Nokia's Ovi Store is set to compete directly with Apple's App Store, Google's Android Market and BlackBerry's App World (which hasn't been launched in Australia yet).

Nokia's Ovi Store is just the second mobile phone app store Australians can access to feature non-free apps. Although a refreshing interface certainly helps when finding apps, there are plenty of teething issues that need ironing out before this can be seen as a serious contender in the ever-growing app market.

We tested the Ovi Store on a Nokia 5800 XpressMusic running the Symbian S60T software. According to Nokia, the Ovi Store application works on more than 50 Nokia handsets running the S60T and S60 operating systems, as well as a range of S40 handsets. The store itself is a free application download from Nokia, available on compatible handsets by entering the download folder in the main menu and clicking "refresh content". The Ovi store will be preinstalled on the upcoming Nokia N97 smartphone, but can also be accessed using a phone's Web browser.

To use the store, users must first create a free Ovi profile. When purchasing a non-free app you can pay via your phone bill or credit card. Unfortunately, the former option is only available for Telstra, Vodafone, Optus and Crazy John's customers; users on 3 and Virgin Mobile will have no choice but to use a credit card.

Opening the Ovi Store takes a good 20 seconds. Users are presented with a flash screen displaying the Ovi logo, before a pop-up connecting message is shown. You then need to select a connection, before the store finally loads. Once loaded, browsing the store over a Wi-Fi connection isn't too slow, but it's no match for the fast and snappy App Store on the iPhone 3G, which even works well when using an over-the-air 3G connection.

Part of the issue with the Ovi Store is the wide range of devices Nokia has to support — the experience on our 5800 XpressMusic will be different to someone accessing the store using a N96, for example. It is certainly a challenge for Nokia to provide a streamlined experience across all devices.

The Ovi Store has a thin library of applications available compared to the App Store, though it is a little unfair to compare the two; Ovi has just launched whereas the App Store was launched in July 2008. Ovi does have one advantage over the App Store: apps include audio and video content, e-mail and SMS applications, ring tones and wallpapers, none of which are available from the App Store.

Unfortunately, the process of purchasing apps isn’t as quick and easy as it is with the App Store. It’s a process that involves pressing buy, re-entering your Ovi account password, choosing the payment method, and then finally purchasing. You will then receive a confirmation SMS with a transaction ID. One of Nokia's biggest issues with Ovi is the fact that there is no integrated desktop software like iTunes.

Thankfully the interface and layout of the Ovi Store are good. Apps are sorted into categories, such as recommended, games, audio and video and personalisation. The transitions between categories are smooth and quick, and the "My Stuff" menu provides your download history at a quick glance.