Transport your PC’s digital media library to television quickly and painlessly with the Noontec Moviedock A6. 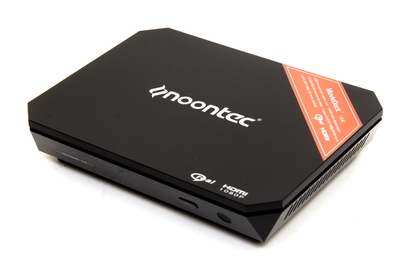 The Noontec Moviedock A6 lets users transport their PC’s digital media library to a television quickly and painlessly. While not without its flaws, it remains great value for money.

The Noontec Moviedock A6 is a media streamer that lets you display stored digital data on your TV. It can be used to play movies, listen to music or view photos in a variety of file formats, including most HD video codecs. With its fuss-free setup, excellent remote control and generous connectivity options, the Noontec Moviedock A6 is hard not to like. It has a few flaws — including a stuffy user interface and potential overheating issues — but it remains a great proposition for the asking price.

Like Western Digital’s similar WD TV, the Moviedock A6 has been designed for casual PC owners who are either uninterested or intimidated by the concept of a media centre. You simply insert a USB storage device into the Moviedock and connect it to your television (composite video and HDMI are both supported). Of course, you can also stream files shared on a local area network. Two USB ports are included on the device, along with a 4-in-1 memory card reader, an optical digital audio output and an Ethernet port for connecting to your home network. This is a very impressive feature set for a media streamer in this price range; it leaves the WD TV dead in the water.

The Noontec Moviedock A6 is an unobtrusive piece of kit with a basic black finish. It’s not as small as the Western Digital WD TV but should still tuck comfortably into most home theatre setups. A blue LED lets you know when the device is powered up, but otherwise it’s plain to a fault. Personally, we much prefer the compact curvature of the WD TV, which also comes with a matching stand for Western Digital My Passport hard drives.

Setting up the Noontec Moviedock A6 was a foolproof process. We connected it to a Pioneer KURO PDP-C509A plasma TV and inserted a USB thumb drive filled with an assortment of music, pictures and video files. The device worked straight out of the box, with no need to connect to a PC first. Once we were on the menu screen, it was a simple matter of selecting the file we wanted to play and sitting back on the sofa.

We were reasonably impressed with the sound and picture quality of the Noontec Moviedock A6. It went toe-to-toe with the WD TV across a variety of codecs, with equally detailed video. The extensive options on the remote control make it easy to tailor clips to fit the screen. This means you can always watch clips in the intended ratio, even while flicking between them.

In fact, the included remote is one of the best things about the Moviedock A6. It actually looks and behaves like a fully fledged TV remote control, with every button you could possibly want present and accounted for. By contrast, the WD TV’s remote was sluggish, undersized and generally a bit rubbish.

However, there are a few caveats, and they’re not small potatoes. First and foremost, the menu interface could be a lot better — especially for novice users. Instead of automatically reorganising your files into Movie, Picture and Music folders, it simply displays them as they appear on your hard drive. By contrast, the WDTV had separate menu screens for each type of media, which made browsing a lot easier. To make matters worse, the interface is considerably less attractive than Western Digital’s offering, with a plain black menu divided by ugly borders. On the plus side, the Noontec Moviedock A6 displays a preview of each file as you scroll down the list — handy if you forgot to rename your JPEGs or can’t remember which TV episode you’re up to.

On another down note, the underside of the Moviedock A6 becomes quite hot during operation — almost too hot to touch. This probably doesn’t bode well for the product’s potential lifespan. We suspect that the Moviedock A6 will burn itself out if used intensively (though we freely admit this is purely conjecture). At any rate, we advise keeping it well away from flammable surfaces!

All up, the Noontec Moviedock A6 is an impressive media streamer with plenty of functionality under the hood. It trumps the Western Digital WD TV in some areas, but is shown up by it in others. Consequently, we think the products are on an equal footing — get the model that appeals to you most.